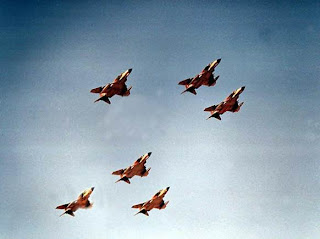 Iranian F-4s during the Iran-Iraq War (from Wikipedia)

Both sides get new lots of points at the beginning of each game day – Israel has slightly more Military Points at the moment but in terms of Political and Intelligence Points the two sides are equal.

A new day started and with it came the angry Palestinian reaction – with violent protests erupting in the West Bank and Gaza. The Israeli public were not hugely happy about this, partly blaming the government. Iran stoked this, managing to make the Jordanians cool on any support they might have had for Israel.

Iran managed to repair 77 of their aircraft, implanting a wide-spread stand down in the process. Generally, only one squadron was ready per base, these tending to be the units that had most working planes and/or had the best aircraft.

Iran rolled a strategic event – Intifada Erupts. Spending 3 of its military points, it managed to influence the Israeli opinion track down to +3. Separately, playing Palestinian Unrest moved Jordan to 0 (Turkey remained unmoved). Each day, Iran can alter readiness states for its fighter squadrons and rebase three.

Israel’s diplomats reminded the US, the GCC and Iran that a nuclear Iran was not in their best interests – they also arranged for a US destroyer to park itself off the Israeli coast as a further missile defence.

Iranian supported terrorists set off a bomb in Tel Aviv, but completely failed to scare a populace used to this things.

Civil/Economic attacks have a high chance of backfiring.

Another 21 of Iran’s ready aircraft broke down, leaving only 54 aircraft available in the whole country to go after any incoming raid. At the moment  though, none was likely.