From Russia With Gore (Review: 'Doctor Who: The Deviant Strain', 2005) 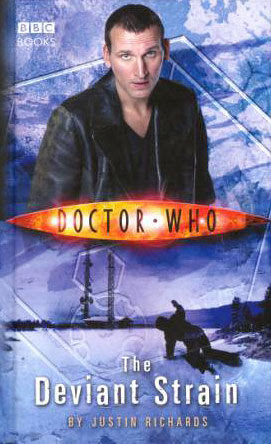 The short tenure, basically under three months, of the Ninth Doctor, means that there wasn't been a tremendous amount released featuring him at the time. While the revival of classic series novel publication may well mean some more, I'm only going to do one work featuring the Ninth Doctor.

So, courtesy of my local library, I am now looking at the fourth of the six Ninth Doctor tie-in novels, The Deviant Strain by Justin Richards

This is from the second half of his tenure; featuring the Doctor, Rose and Captain Jack. Only the Doctor and Rose actually feature on the cover of the first edition; the later reprints don't feature Rose, possibly to due use-of-likeness issues after she left the show.

The three time travellers arrive in Russia in the early 21st century, at an abandoned Soviet naval base, where something from even before the base was built is awake and killing people. They team up with Russian special forces to find out what is going on... and stop it before it is too late.

Enjoyable enough, but this is hardly a page-turner and there are frankly better novels out there for Nine. The Discontinuity Guide calls it "workmanlike" and I'm inclined to agree.

Posted by Silent Hunter at 07:16 No comments:

One of our new players, Spart, is developing a new sim based on  a Japanese animé. This promises to be a fast-space s

In a not too far distant future, mass transportation reached a new level of autonomy.


But even the most advanced systems can be bugged, overloaded and even hacked.

That's where the men and women of éX-Driver come in - highly trained people who are equipped with high tech gear and the ancient fossil-fuelled cars to stop rampaging AI cars.