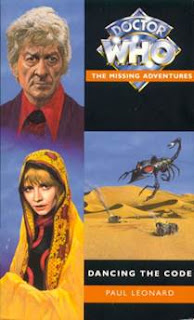 April 1995 saw the release of the ninth “Missing Adventures” novel by Virgin – the second of three in this particular run penned by Paul Leonard, whose first novel Venusian Lullaby was highly acclaimed. As the title and the premise intrigued me, it becomes the second Third Doctor work covered in my “Eleven Faces of Doctor Who story”.

As discussed earlier, this book is a lot darker and more adult than the TV series – language and violence in particular.

This is a UNIT story, located near the end of Jo Grant’s time on the show – explicitly set between “Planet of the Daleks” and her final story “The Green Death”. This means that we also have the Brigadier, Benton and Yates. While the TARDIS is functional, it has only limited use in an entirely Earth-bound story.

The Doctor (for some reason) builds a machine that can project the future – with its projection showing the Brigadier shooting him and Jo in cold blood. Determined to prevent this, Jo is sent on a secret mission to the war-torn African country of Kebiria, where a UNIT soldier has been killed, his blooding oozing a honey like substance. His last words to a reporter were “dancing the code”.

The Doctor, Jo and UNIT find themselves having to stop the Xarax, a race of hive-minded giant insects with the ability to copy human beings – and their technology.

·         The three regulars all get good parts in this – Jo in particular, having a rather unpleasant time of it. The supporting characters are also generally well written.

·         A scene where a rebel camp is strafed by government jets, resulting in many civilian deaths, stands out as the most moving and horrific of the book, with a strong contemporary resonance considering recent events in Libya and Syria.

·         There is a suitably epic scale to this, with big battles, missiles flying about and a UNIT HQ shootout that would have not featured on the show as it would blow the budget.

·         The final twists are very good and there is a strong air of partial failure in the ultimate consequences of the Xarax activities.

·         The precise meaning of the title isn’t satisfactorily explained in the book.

·         The explanation of the projection is telegraphed well in advance.

An enjoyable page-turner with an interesting variant on an alien invasion and big set-pieces. Not perfect, but certainly well up to standard.