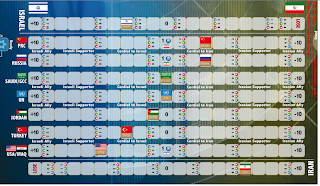 A small correction from yesterday – Iran actually had 59 jets break down. Also, that terror attack is not happening until Turn 4.

With Israeli’s negotiators tied up doing other things, a special forces unit was tasked with destroying one of the remaining facilities at Natanz. These would take 24 hours to reach their target – what with tight security and all that.

Although I might well delay this until Turn 6 as night time ops have a better chance of success.

One of the two battalions of Shahab-3 missiles moved their missile launchers to their dispersed sites and fired off four missiles. Of these, only three flew properly with a fourth crashing nearby. As the missiles arced, they were quickly spotted by the American cruiser off Kuwait, which shot them all down with its SM-3 missiles. The Israeli Arrow and PAC-3 units weren’t even needed.

Iran promptly decided to have another go with its other battalion the following night.

The SM-3s are superb missiles in this game and any Iranian attack (up to 8 with the Shahabs, 16 if you buy the Sejil-2s) must go through them if Israel has it. Attacks against Turkey and the GCC countries aren’t featured in this game. If the missile actually gets through, then it still stands a big chance of just plain missing.

As the next Iranian move was a card retrieval, I won’t discuss it.

More dire news came from the IRIAF – only 95 of their 192 fighters were now working. It was clear that some stand-downs were needed to fix the problems.

The price of being a pariah state. There’s another lot of breakdown rolls in Turn 3, then I’ll get probably over 100 repair rolls. Something that needs simplifying. Putting aircraft in stand down prevents breakdowns, but also stops them responding to Israeli strikes. As these aren’t likely at the moment, Iran can take the risk.

Turn 3 will be short – only a couple of moves and those breakdown rolls to make.