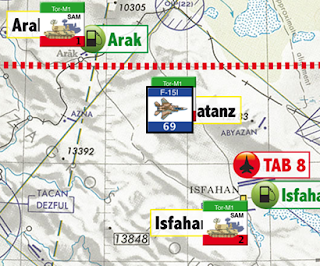 I’m going to do this as a narrative, providing commentary in italics.

On a warm April day in early 2013, the Israeli Cabinet met to talk about grave things. It was clear that Iran was heading towards a nuclear bomb and it was now time to attack. A large Israeli strike force was on the tarmac at Ramon airbase, ready to strike the main base of the nuclear development – Natanz. With recent major concessions, unpopular domestically on the Palestinian issue, Turkey was willing to allow them to use their air space for a one-time flight through to the facility.

The goal of PI for the Israelis isn’t to blow the Iranian nuclear programme into next week – but to force Iranian domestic opinion to change in order that it gives said programme up. Blowing it up is a means to that end, but only one – the key is to alter the opinions of other international actors to provide you with assistance in doing that.

There are various starting options – I chose the one called the Palestinian Option, which boosts Israel’s position among the Gulf States at the cost of some domestic unpopularity and allows for a free flight through Turkey. Any others will require persuasion and/or dirty tricks.

Each major power takes a certain position at the beginning of each game day (this is Day 1), the two sides get Political, Intelligence and Military Points based on these positions – if a state ends up a full ally, other assistance becomes available. If the Americans (who start as supporters) go to full Ally, woe betide Iran, as B-2s with big bunker busters become available.

Israel had prepared well for this, with improved missile defences, buying AIM-120Ds from the USA and obtaining fighter decoys for the flight in. However, they did not have enough working bunker busters working to take out the underground halls at Natanz, so instead focussed on destroying the above ground facilities.

Basically, I messed up the strike planning. Each side can buy upgrades at game beginning and sometimes with the right cards in game.

Iran had been doing some preparing, but the arms embargo was hurting them. A pair of Pantsyr batteries from Syria and some improved air-to-air missiles from China should surely help here – although Natanz itself was still only covered by the local stuff, including a Tor-M1 battery. Laser decoys were in place to make things harder for the strikers. In addition, for the planned retaliation against the West, they’d gotten contact mines to strew into the Straits of Hormuz.

Most Iranian missiles and all their AAA does not really stand a chance against Israeli planes, provided enough prep is done.

24 F-15Is and 48 F-16Is took off for the long flight through Turkey, with 3 supporting aircraft and 8 tankers assisting them. As they approached, Israeli hackers launched a network attack through the planes against the Iranian air defence system, taking down the I-Hawk SAMs around Natanz.

As the jets crossed the Iranian border, they dropped into the radar cover of the Zagros Mountains, stopping the Iranians from detecting or engaging them. 12 of the F-16s broke off to attack the nearby airfields, putting holes in their taxiways, while twelve more started jamming the HQ-2 and Kub SAM systems that would threaten them. Iran was unable to stop this flight coming in.

This is really the largest attack Israel can conduct in the game – as you can see, it’s a pretty potent force to employ. You can suppress the SAM sites or launch dedicated destruction missions – data is provided for this choice.

As they reached the facility, one Tor-M1 launcher lit them up with his radar, hoping the others would be able to fire through the data link. For his trouble, he got a HARM anti-radar missile in his face. Nobody else was able to fire or stop the precision guided munitions as the GPS guidance allowed the F-15s to toss the bombs from outside their ranges.

This is realistic – Israel’s 1981 attack on Osirak wasn’t spotted at all and Iraqi forces didn’t even open fire until they were leaving. Saddam Hussein was not impressed and executed most of the local commanders for it.

Lob-toss, formerly a method relegated to nuke delivery (as this is the kind of thing where accuracy is not an issue and it gives you time to get out of Dodge before Dodge turns into a mushroom cloud), is now a highly viable option for conventional weapon attacks with improved guidance.

The bombs rained down on the site, wrecking most of the surface buildings and doing minor damage to the halls – but the site was going to need another go to finish the job. The Israeli strike force began to work its way out, the SAMs still suppressed.

Iran did manage to scramble 4 F-5s, these approaching the force in a death or glory charge. Unfortunately for them, none of them got glory and one of them got death as two F-16s pulled off. The AIM-120Ds fireballed three of the jets from over 50 miles away and sent the fourth limping back to base.

Most of their jets are no good either – especially during a daylight raid. Israel is passing through two sectors of the Iranian system and both get a chance to launch something, but only one did due to the efficiency of Israeli fighter suppression.

That nuisance dealt with, the Israelis returned home without losses, but 7 of their aircraft needed extra work to get them ready for another raid.

This strike is still deemed in flight until Turn 2 and these planes will not be available until Turn 4 as the pilots need their beauty sleep. Seriously, pilots should not fly tired and rest breaks get mandated for combat pilots.

The political game now began. The Turkish public was annoyed at the use of their air space, but understanding – although they were not going to allow for a further strike at the moment. Iran’s response was rapid, with its missile boats and other craft inflicting a partial closure on the Straits – but the whole operation had no political effect at present.

However, there was another move the Israelis could make – the Americans deployed a Bunker Hill-class cruiser off Kuwait, ready to intercept an Iranian missile response, which Tehran was rapidly ordering.

While these missiles were being readied, the Iranians involved themselves in a bit of black propaganda – releasing photographs of the Turkish Defence Minister in bed with what was purportedly two Israeli prostitutes. Unfortunately, Israel exposed that these women were in fact Iranian and the whole thing backfired on Iran – Turkey’s position remained unchanged, but the Saudis were furious and the Chinese withdrew their support.

‘Incriminating Photographs’ is a card both sides have in their decks and they can also expose these dirty tricks as well. Iran needs support from the Russians or the Chinese to get improved weapons such as the S-300 advanced SAM.

The Israelis had a spot of indecision over who they should focus their attention on to get the airspace open. In the meantime, a group of Mossad ‘ninjas’ blew up an Iranian secret police headquarters – which resulted in some quiet cheering in the houses of Bam.

And a two point move to Israel in Iranian domestic opinion. Ziva David, or rather her equally attractive buddies in fiction’s sexiest spy agency, earned their paycheque.

Israeli negotiators started talking to the Saudis to let them use their airspace for the next strike. It was going to take a while. Iran repositioned its Pantsyrs to cover the undamaged nuclear sites of Arak and Isfahan, while discovering that 54 of its fighter jets had broken down.

Iran has to roll for aircraft break down each turn – Israel only after each strike. Each side can repair their planes once per game day – i.e. every three turns. This will involve a lot of dice rolling – in fact, I did a lot before I double-checked the rules.

As morning turned to afternoon, both sides were making further political and military moves… Iran had a terrorist and missile surprise for Israel…

Iran’s goal is to inflict enough political embarrassment on Israel that its leadership gets a no-confidence vote from the Knesset. They can do this by various means – shooting down Israeli planes, calling in Hezbollah or going ballistic… Will they succeed?