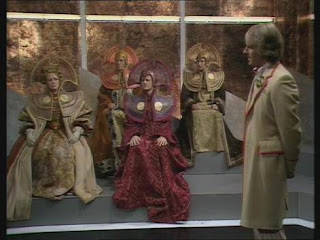 One reason why the Doctor left Gallifrey

The inter-season break saw Britain get its fourth television channel (Channel 4) and the development start on a show that would cause severe problems for Doctor Who when it came to ratings in the Colin Baker era – The A-Team[1].

At the BBC, Season 20’s plan underwent a number of changes. Initially JNT planned for a 28-episode run in late 1982, with the 21st season intended to cover the show’s looming 20th birthday in November 1983. However, it became clear that Davison’s additional commitment to Sink or Swim meant that he could not handle the recording schedules for both and Alan Hart, BBC1 Controller, had to sort the dispute out, ‘awarding’ him to the sitcom. Thus, Season 20 would go in the same late winter slot as Season 19. Still desiring something for the anniversary, Hart advised JNT to put the budget for two episodes aside for a special, thus making this run 26 episodes… or that was the plan. Until union trouble reared its ugly head again.

Season 20 was planned to close on a four-part Dalek story called “The Return”, but an electricians union dispute forced a delay in the production of “Enlightenment” and the studio days had to go to a story that was needed to tie up some key plots. Thus the run would be 22 episodes and “The Return” would emerge under a different title in Season 21.

This run saw the departure of Nyssa and the arrival of a new male companion, Vislor Turlough, who would be the last male companion of the classic era. Tegan’s return to the show after her apparent departure in “Time-Flight” was always planned.

Speaking of women, both Nyssa and Tegan’s wardrobe got ‘sexed up’ for this particular run (the actors being allowed to change their outfits between stories), to the point that Janet Fielding suffered wardrobe malfunctions during the filming of two stories here.

By a happy chance, in this ‘anniversary’ season, every story features some element from a previous season.

Omega (“The Three Doctors”) plots to cross into the universe of matter by bonding with the Doctor. Fearing the destruction of the universe, the Time Lords summon him to Gallifrey – with the intention to execute him. Meanwhile, Tegan goes to Amsterdam to look for his missing cousin and finds Omega’s base…

Containing extensive location work in the Dutch capital[2], this mediocre tale (for a start, Omega looks very different from his previous appearance) contains a lot of good elements, including Davison getting to play the villain, that are felt not to ultimately gel. Perhaps the most notable bit is the appearance of Davison’s successor as the Doctor, Colin Baker – playing a guard who gets to shoot him[3]!

The Mara (“Kinda”) possesses Tegan again, getting her to take the TARDIS to Manussa, where it plans to use the Great Crystal to return to power…

A sequel to the Season 19 story, this one is much-loved by Steven Moffat, although most fans don’t deem it quite as good as the first one – it finished in the lower half of the Mighty 200 poll. The guest cast includes an early role for the very well-known actor Martin Clunes (Doc Martin, Men Behaving Badly) – clips from it still get wheeled out when he’s interviewed.

A clip from the serial can be seen here.

The next three stories form what is usually referred to as “The Guardian Trilogy”, a trio of stories all involving the Black Guardian’s attempt to get revenge on the Doctor for denying him the Key to Time (Season 16), by getting an exiled alien to kill him…

Tegan and Nyssa are separated from the Doctor in time. They end up at a private school six years apart, where the Brigadier[4] is now a teacher, a pupil is actually from another planet and a group of scientists need the Doctor’s remaining generations to die.

A very ambitious and complex story that did nasty things to the UNIT dating debate[5], introduces something called the “Blinovitch Limitation Effect” and features a group of aliens who don’t want to destroy the world for a change, this is a rather good tale that was actually a late replacement for the planned story involving a space whale.

It’s an unusual approach when a companion in his first episode is about to brain the Doctor with a rock, but Turlough (he is generally known by his surname) is not your usual companion. He’s male for a start, but was also prone to lying, had a strong self-preservation instinct that could be termed cowardice by the uncharitable and started off working for the Black Guardian to try to get back to his home world[6] – his past was mysterious until his final story. He’s one of the better companions of the JNT era – we have worse to come, that’s for sure.

Mark Strickson (1959-present) took on the role, having previously been in a few episodes of BBC medical soap Angels. He was required to dye his hair red for the role as his natural blond hair was felt to be too close to Davison’s in long shots – his dark clothing choice was for the same reason. Post DW, he did a bit more acting, then became a wildlife documentary producer. One of his more noteworthy roles was in video mockumentary Lust in Space, playing the prosecutor in a ‘trial’ of Doctor Who for sexism.

Turlough sabotages the TARDIS and the time machine lands on a liner, heading for a space station where those with a terrible disease go to die…

An interesting story with a lot of production problems (the strike impacting studio time and ultimately requiring remounts), this one is perhaps best remembered for Nyssa, suffering from high temperature, taking her skirt off suddenly and spending the rest of what is her final story in pretty much just a slip, including having an action scene while in this limited outfit. Sutton was apparently not happy about it.

The TARDIS arrives on what appears to be an Edwardian racing yacht, but is in reality a disguised spaceship engaging in an interplanetary race. Meanwhile, Turlough has a choice to make.

The first Doctor Who serial penned by a woman (Barbara Clegg), also with a female director, this highly enjoyable tale was also the 1963-89 serial that I ever watched.

Turlough now safely on the side of good, it was time to finish the season with the introduction of another ‘companion’, who did not work as planned.

The travellers arrive in England in 125 where they meet King John – but the Doctor quickly realises this John is an imposter as the real one is about to sign Magna Carta!

An inconsequential tale, but at least the Doctor gets a sword fight. It’s also notable for the introduction of a companion destined to only appear in two tales.

After a freelance effects designer approached him with a working robot prop, JNT decided to incorporate it into the show – becoming shape-changing android Kamelion, voiced by veteran actor Gerald Flood, whose previous credits included a show called Pathfinders in Space, produced by Sydney Newman.

Unfortunately for this interesting idea, one of the designers (Mike Power) died in a boating accident with the knowledge of how to make the software work properly. His partner in all this, Chris Padmore, could not perfect the walking mechanism and the prop proved far more problematic than feared, breaking down constantly as well as being unable to mime along with Flood’s pre-recorded dialogue. With the logical alternative of getting a human actor probably a non-starter on cost grounds, JNT dropped him as a regular and decided that he would get only one more appearance in Season 21.

The ratings fell sharply, down to only 7 million on average. This was a level not since Season 18 and before that Season 7. Rot was setting in, but it was not yet clear – it was time for a celebration.

[1]I pity the fool who doesn’t know about this show!

[2]While the city is the capital of the Netherlands, the seat of government for that kingdom is located in The Hague.

[3]Baker still jokes that’s how he got the job – while it certainly brought him to the attention of JNT, this was not what sealed the deal.

[4]The original plan was to get William Russell in playing Ian Chesterton, but his schedule wouldn’t permit it.

[5]JNT ignoring Ian Levine’s warning on this matter as he liked setting the first bit in the Silver Jubilee year of 1977.