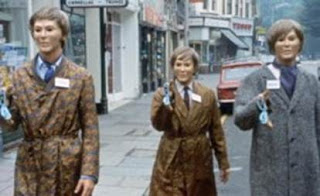 Season 7 of Doctor Who saw a batch of changes to the show.

Firstly, it was in colour. Secondly, it had a new Doctor. Thirdly, it took place entirely on present-day-ish Earth, bar one bit. Fourth, it started in winter rather than the traditional autumn.

Before that, though, the inevitable change of production team. Bryant and Sherwin had planned to produce the entire 25-episode seventh season (the shortest one to that point), but after the first two stories, they were reassigned to work on the BBC-ZDF Paul Temple TV series[1]. Barry Letts, who had previously directed “The Enemy of the World”, became the new producer, while Terrance Dicks remained as script editor.

Barry Letts (1925-2009) would become another legend of the show – spending the entire five season tenure of the Third Doctor as producer, working with Terrance Dicks. Together, they would create some of the show’s best moments and introduce some of its finest characters. When Letts died, after a long career that involved producing many classic serials for the BBC, he had “The Waters of Mars” dedicated to him.

Before these two took over though, Bryant and Sherwin would create the Third Doctor, along with a new assistant. The latter was Dr. Elizabeth “Liz” Shaw, a UNIT scientist played by Caroline John, who looked up a load of technical terms and then found herself with a script full of technobabble. The only companion never to travel in the TARDIS, Liz was probably too clever to work as a companion (defeating a key component of the role, namely someone to ask the questions the audience are asking) – she only appears in this season, with Letts and Dicks deciding against renewing her contract.

Inspired by the Quatermass serials, they created a scenario where the Doctor would be on Earth and the aliens were coming to them. These four stories were also more adult-orientated (more like Torchwood but without the swearing, nudity or Captain Jack). While they’re all good, they’re not really Doctor Who… our Time Lord is not someone who should be confined to one place and time.

A note on the archival situation – the BBC were at this point continuing to junk the masters, so a lot of the Third Doctor stuff is basically reconversions to PAL from NTSC copies of the PAL originals for the American market, often off-air recordings. The quality is therefore a bit varied, as NTSC uses a lower number of lines than PAL. Some bits are only in black-and-white; various re-colourisation efforts have gone on over the years, with mixed success.

Jon Pertwee (1919-1996) was a Royal Navy intelligence officer in the Second World War, who got transferred off HMS Hood three days before it was lost with all bar three of its crew in the Battle of the Denmark Strait in 1941[2]. After the war, he returned to the acting career that he had begun before it.

Pertwee had been best known previously for his role as Chief Petty Officer Pertwee in the BBC radio sitcom The Navy Lark (1959 to 1977), with Bryant and Sherwin expecting him to play the role in a comic manner.

He didn’t. The Third Doctor is a serious, technology loving man with action, who dressed as an Edwardian ‘dandy’, wearing smoking jackets and frilled shirts, quaffing wine with diplomats and generally billing a “citizen of the Universe and a gentleman to boot”[3], a markedly different style to the current incarnation. The straight approach paid dividends – Pertwee’s Doctor is one much loved by fans.

After Who, Pertwee’s next famous role was as scarecrow Worzel Gummidge in the ITV show of the same name that ran from 1979 to 1981, with two more New Zealand produced seasons from 1987 to 1989.

When he died in 1996, the British broadcast of the TV movie was dedicated to his memory.

So, here’s the set-up for Season 7. The Doctor is exiled to Earth in the late 20th century by the Time Lords, who take away his ability to travel in time. He gets a job as scientific advisor to UNIT, who are having to deal with a variety of alien menaces.

The newly regenerated Doctor arrives on a Earth during a mysterious meteorite shower. As he tries to convince the authorities he is not some crazy guy with two hearts[4], the meteorites go missing – and so do people… For strange things are going on at a plastics factory. Strange and alien things…

The first appearance of the Autons, this Robert Holmes-penned story is an enjoyable opener for the Third Doctor, creating a classic alien species that has popped up a number of times since.

“Spearhead” has the unique status of being the only serial of the classic run filmed entirely on location using 16mm film, due to a scene-shifters’ strike at the BBC that precluded any studio use. It therefore gives me an opportunity to discuss the unusual way that Doctor Who was filmed from the beginning until the end of Season 22 – along with a lot of BBC drama of all sorts.

Basically, the BBC filmed all their studio scenes with 2-inch quadraplex videotape. The cameras used were large and bulky, suitable for wheeling around a studio floor, but not for lumbering around a quarry (you’ve probably seen pictures of old TV cameras). For location filming, they used more portable, but lower quality, 16mm film cameras (there were some 35mm sequences though).

This therefore results in the interior scenes looking different to the exterior scenes – cleaner and higher quality. It’s something that you get used to after a while – in fact Who fans become very astute at spotting the difference and when a director is playing with the conventions.

You don’t really notice this with the black-and-white stories, by the way – many of the archived copies are “tele-recorded” (i.e. recorded from a projection) 16mm film copies, intended for foreign sale as film is a more universal medium than videotape[5].

The show went entirely to videotape from Season 23 and is now done with hi-def videotape that’s been made to look like film in post-production.

Doctor Who and the Silurians (7 episodes – yes, that is the actual title)

The first story written entirely by ardent left-winger Malcolm Hulke (a man never afraid to put political overtones in his work), the first appearance of Homo reptilia is a classic well-written and highly moral tale about mistrust that features some iconic scenes, particularly one at Marylebone Station in London. The Doctor’s classic

The story also marks the first use in the show of “Colour Separation Overlay” (CSO, known as chroma key outside the BBC), an early form of the vital for sci-fi technology known as ‘green screen’ where both elements, foreground and background, are ‘live’. The CSO in 1970s Doctor Who can be a bit clunky; they were getting to grips with the new technology.

The Ambassadors of Death (7 episodes. This is currently only available in black and white in VHS form, but a re-colourised version is due to be released on DVD, although no date has yet been announced)

Two manned missions to Mars go missing. When the second capsule gets back, its occupants disappear and UNIT discover the capsule is full of radiation…

Probably the least remembered story of Season 7, “Ambassadors” is unfairly ignored – it’s a very good story where things are not what they seem.

UNIT are providing security for a drilling project with the aim of going all way through the Earth’s crust with the aim of getting cheap energy, when a green liquid leaks from the project and turns those who touch it into vicious primeval creatures. That’s the least of the Doctor’s problems, though…

A story where Barry Letts had to step in at short notice to direct after Douglas Camfield (one of the show’s best ever directors) had a heart attack, “Inferno” is a true classic of Doctor Who primarily for the bit of “padding” added to get it to seven episodes - Episodes 3 to 6 primarily involve the Doctor ending up on an alternative Earth where Britain is a fascist dictatorship, featuring all the UNIT regulars in evil versions (the ‘Brigade Leader’ has an eye patch, but no moustache, for example).

During this run, the BBC seriously considered cancelling the show (the ratings were not all that good for “Inferno”, especially at a time when there were only three TV channels[6]) – Letts and Dicks actually started work on a possible replacement before getting the confirmation DW was coming back. Not happy with the current setting, they prepared to give the Doctor a little bit more freedom…

[1]Paul Temple was an amateur private created by the late Francis Durbridge, who worked with his journalist missus to solve fiendish crimes. There have been a number of TV and radio adaptations – this one was apparently the first international TV co-production, with assistance from German broadcaster ZDF (Zweites Deutsches Fernsehen – Second German Television) allowing for extensive location filming in West Germany.

[2] The ship’s magazines went up from a lucky hit from the German battleship Bismarck, prompting a massive naval chase that led to the German’s sinking. The whole engagement is one of the most famous in the history of the war.

[3]To quote the First Doctor in “The Feast of Steven”, episode 7 of “The Daleks’ Master Plan”.

[4]First time this is mentioned.

[5]Doctor Who Magazine recently did a great two-part series on the foreign sales of early Who.

[6]BBC1, BBC2 and the group of regional broadcasters collectively known as ITV. ITV will be discussed in more depth later on.