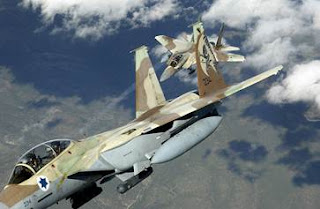 It’s been a while since my last post – had a lot on and wasn’t able to complete this until then. I can’t promise a quick conclusion to this.

Israeli launched its 24 F-15s on another daring mission deep into the heart of Iranian airspace. Another successful Suter attack, along with 12 F-15s on fighter suppression impaired the Iranian fighter response and stopped the SA-2 site at Tehran West from being able to do a thing to stop the near-complete destruction of the site. The only thing left was a solitary launcher, useless for any purpose bar being a short-range ballistic missile.

To take a SAM site out, you only need to destroy the primary radar. Not a brilliant roll on fighter suppression, as we’ll see later.

With no I-Hawk sites or local SAMs (par a few puny MANPADS), the 6 bunker buster carrying Ra’ams preceded to drop their bombs through the rock into Qom’s reactor hall, wrecking the facility as they left.

However, there was trouble ahead for the main strike. The Iranians scrambled four MiG-29s from 23 Tactical Fighter Squadron. Three F-15s split off to intercept the Fulcrums, destroying two and forcing a third to return to base with damage. Unfortunately, they used up all their AIM-120s in the process, allowing the solitary Iranian fighter to fire back with two missiles of its own. The resultant hit took out an F-15I, but the pilot was able to get back to Turkish airspace before she punched out, ending up in hospital. Israel could freely deny the loss as Iran could not produce the plane or pilot.

If I’d broken off four, then Israel might not have lost the F-15. Over confidence really.

Two more MiG-29s went for the SAM site strikers, but broke off due to damage received before posing a proper threat to this group. In total, 120 aircraft were now down with damage or gripes.

The success of the strike led to some political capital for Israel and Tehran, reeling in shock, wasn’t able to do much about it. It did launch four SSMs (out of a planned eight) at Israel, but all were intercepted by the Aegis cruiser.

The US President made a speech supporting Israel, but it did not sway many minds.

As this was a Decisive Victory and I rolled high on the impact table, Iran lost all its Political Points and Israel gained four. I’m going to try a quicker, not in the rules, way of maintenance rolls for Turn 7, as I don’t really want to roll a total of 240 dice.

F-15s won’t be back in play until Turn 9, so a follow-up strike on Natanz is not an option at present.