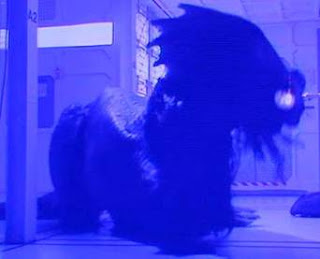 Believe it or not, that is not the worst costume of this run

As Doctor Who moved into its 21st season, there was about to be another massive change. Peter Davison elected to go after three years in the role of the Doctor, as per the advice of Patrick Troughton, but Fielding and Strickson also departed the scene. This season shares a distinction with only Season 4 of having an entirely different regular cast at the end than at the beginning.

The show shifted timeslot again; for most of the country it would now go out on Thursdays and Fridays.

Were it not for the need to free up two slots to fit in coverage of the 1984 Sarajevo Winter Olympics, then this would have been a standard 26-episode series. While 26 episodes of material were made, there were only 24 in this run, with two of those being extended to 45 minutes – a first for what is now the standard DW practice and one that was already planned to be the norm for Season 22.

Warriors of the Deep (4 parts)

The Doctor, Tegan and Turlough arrive at a nuclear missile base under the sea c.2084, where mysterious deaths have been occurring. Not only is the base under threat from some of its own personnel, but two other Terran races want it for their own ends.

Johnny Byrne’s third and final TV story[1], this high-body-count Cold War-themed tale has an interesting premise, guest stars Ingrid Pitt and features two returning monsters – the Silurians and the Sea Devils. However, it is fatally compromised by bad production decisions. It’s seriously over-lit and features a creature called the Myrka that is compared to a pantomime horse (and was operated by two people who did that sort of thing) by reviewers. This one also suffered more behind the scenes problems; a snap general election in June 1983 resulted in Ealing Studios being unavailable for filming water tank scenes and the production was badly rushed for time in its studio sessions.

The team go to an English village to allow Tegan to visit her grandfather, where an alien creature is being reawakened by an English Civil War re-enactment.

The final two parter with 25-minute episodes, this contemporary tale is the only one done by Eric Pringle, who did not work for the show again after being unhappy with Eric Saward’s rewrites. Production saw an infamous (and widely aired) outtake where an over-excited horse wrecked a prop lych gate[2]; the BBC used it on safety videos to show how not to work with animals. JNT also had to get permission from the BBC to allow Part One to run at 25 minutes 18 seconds.

Fandom seems to like this one; it’s a tight and at times horrific tale that would probably work well today.

The TARDIS lands on the human colony of Frontios in the far future, where refugees from a doomed Earth are being sucked underground. Then the ship is apparently destroyed during a meteorite bombardment…

This Christopher H. Bidmead serial (his last) suffered two tragedies during pre-production; the suicide of production designer Barrie Dobbins and the murder of Peter Arne, who had been due to play Mr Range[3]. Despite this and budget issues pushing this entirely into studio, this is one of the best stories of the Fifth Doctor’s tenure and contains a classic scene where the Doctor passes Tegan off as a malfunctioning android to a batch of aliens.

Resurrection of the Daleks (filmed and intended as 4 parts, but broadcast as two 45-minute episodes due to Winter Olympics coverage[4])

Team TARDIS arrive in a time corridor linking modern-day London with a spaceship in the far future. The Daleks are seeking to free the imprisoned Davros to stop a virus that is devastating their kind, but Davros has other ideas…

The remount of the story canned due to strike action in Season 20, the only Dalek TV appearance with this Doctor is a very bloody affair, with the highest on-screen death count of any serial in the show’s history (and in fact higher than this year’s The Terminator!). This is deemed a case of style over substance, with some strange actions by the Doctor and is a story that Eric Saward has stated he is dissatisfied with. At the end of this tale, Tegan leaves, sickened by the death she has witnessed.

This story never got a Target novelisation as a deal was not reached with Saward, although a fan one exists.

After Turlough rescues an attractive female botanist from drowning, Kamelion falls under the Master’s control and takes the TARDIS to the volcanic planet Sarn.

Featuring location filming on Lanzarote (in the days before it got jammed with drunken British tourists), which also plays Sarn, Peter Grimwade’s final TV story sees the departure of Turlough -and the destruction of Kamelion[5]. It’s gotten a drubbing over the years, but isn’t that bad.

However, this one is best known for the bikini-clad debut of one of the more contentious companions…

For all the reputation associated with the women of Doctor Who, only one of them has actually been in a bikini on screen, Perpugilliam "Peri" Brown[6]. A young American botanist with a penchant of inappropriate clothing and attracting the lust of more than one villain, she was verbally combative with the Sixth Doctor, as well as being prone to screaming. Not the most loved companion (lusted is a different subject), but has improved in her Big Finish appearances.

JNT was deliberately trying to up the show’s sex appeal and to play the role, he picked Nicola Bryant (1960-present). Bryant, who had done no TV work before this and had to take on a batch of cabaret work to get her Equity card, was in fact British, only holding American citizenship by marriage. Her accent is awful (she slips out of it frequently and uses British slang), but for some bizarre reason, a pretence was made that she actually was American, with Bryant having to use, for a while at any rate, an American accent out-of-character too.

Bryant’s post-DW career has been limited to guest roles on TV and theatre, with a back injury in the early 2000s playing a big part in this according to her official website.

The Doctor and Peri land on the planet Androzani Minor, where they both develop a possibly lethal poisoning from the raw form of the life-extending drug spectrox. As they look for an antidote, they are caught up in a deadly feud that one of them isn’t going to get out of alive…

Robert Holmes returned to the show for what was Graeme Harper’s full debut in the director’s chair. The former was given only one instruction – kill the Fifth Doctor. He proceeded to do so in dramatic fashion, creating (despite cuts being needed to get the story done in time) what many feel, including myself is the best story in the entire history of the show – it won the Mighty 200 poll. It features two brilliant cliff-hangers (especially Part Three[8]) and arguably the best regeneration scene in the show’s history[9]. Davison has stated he’d have stayed for longer if he had more scripts like this.

JNT decided to have the last serial of the season be the first to feature the new Doctor, to reassure viewers during the long season break. This serial, which featured a slightly modified version of the star field title sequence, was not exactly going to do that…

The new regenerated Doctor suffers from severe regenerative instability and decides to become a hermit, where he stumbles into a plot by an alien race to spread their eggs all over the galaxy.

“Caves of Androzani” won the Mighty 200 poll and this one… came bottom. Featuring poor acting, a stupid plot and a truly infamous scene where the Doctor tries to strangle Peri, initial cautious welcome by fans turned into deep loathing over time.

Loud, not to everyone’s taste – and was just the costume: The Sixth Doctor

The Sixth Doctor was loud and brash, with a penchant for excessive wordiness, arrogance and well, being pretty much the polar opposite of the previous incarnation. In fact, he was at times unlikeable. This was topped off with a hideous multi-coloured coat, that JNT forced on Colin Baker (who wanted to wear black) after telling the costume designer several times the design was not tasteless enough.  Baker’s Doctor gets a bad rep, but most fans feel this is due to poor scripting. Hand the guy a decent script and he’ll excel; as amply demonstrated when he was voted favourite Big Finish Doctor a few years back.

Colin Baker (1943-present), no relation to Tom, got the gig after impressing at a wedding that JNT went to, but had an impressive career beforehand, appearing in a mini-series of War & Peace for the BBC, along with drama The Brothers, where he played a ruthless merchant banker. We have already mentioned his guest starring role in “Arc of Infinity”, but he also hammed it up in an episode of Blake’s 7.

Ultimately dismissed from the show (as we shall discuss in Season 24’s entry), his post-Who acting career has been largely limited to guest roles and pantomime[10]. In 2012, he went on I’m A Celebrity, Get Me Out Of Here!, the only Doctor to do so, with the stated (and successful) goal of losing weight, before going out after losing a Bushtucker Trial. He also wrote a graphic novel in the Whoniverse, the only Doctor to have written something for it.

The show continued to be successful – with Davison’s departure making the BBC evening news. The average rating was 7.1 million, a slight uptick on Season 20 and something that would maintained as the Doctor entered a turbulent 22nd season…

[1]He did a treatment for a fourth, but it wasn’t made (due to Byrne falling out with the production team over script edits to “Warriors”) and ended up being done in audio by Big Finish.

[2]The shot was still usable up to this point.

[3]The inquest deemed a vagrant who Arne had been associated with was the killer, the vagrant having been found drowned in the Thames several days later in a presumed suicide. No motive for the murder has ever been established.

[4]Video releases (and versions sold abroad, including a PBS version that was a mistakenly sent un-dubbed copy, leaving the sound effects off Part Three and Four) had this in four parts though, although the DVD does include the two-part broadcast version.

[5]Davison stated that his emotion in the death was pure acting and he was glad to see the back of the unloved prop.

[6]A scene with Martha Jones in her underwear was considered by RTD but dropped in scripting, along with another one for Amy Pond in “The Hungry Earth”. A naked Martha clone turns up in “The Sontaran Stratagem”, but the bare back shot is of body double Mariam Nundy, as Freema Agyeman is in shot playing proper Martha. It is also worth noting that all three post-2005 Doctors have gotten their shirts off on screen, along with Mickey Smith. As for Captain Jack…

[7]Press reports stated there would be a story called “The Doctor’s Wife”, but this was merely a ruse by JNT to confirm the existence of a production office leak.

[9]Only the Tenth Doctor’s departure in “The End of Time” comes close, frankly.

[10]As it’s panto season, it is worth pointing out that a lot of old DW stars still tread the boards at this time of year. Oh, yes they do!