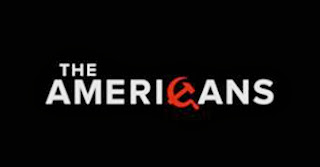 (This article contains spoilers from the get-go; you have been warned, comrades)

-          Comrade Major Stepashin, our sources in Great Britain have discovered that Independent Television are showing an American drama in primetime on a Saturday. Is this not an unusual thing for them?

-          Yes, Comrade General Karlov. I have reason to believe that they have not done this since a work called ‘Pushing Daisies’ in 2007. If you remember, comrade, that imperialist drama involved Anna Friel as a woman coming back from the dead.

-          Is it not a thing of that British capitalist network that they do not show American works in primetime? Do they not have their own bourgeois television industry to protect?

-          That is true, General. I would note however, that they seem to be showing it in a 55-minute slot and largely omitting advertisements for anything that is not their own decadent broadcasting, such as that exploitative ‘X Factor’.

Philip and Elizabeth Morris appear to be a happy family living in Washington DC in 1981. They have two kids, a nice suburban home and their own business, a travel agency. However, things aren’t what they seem… for in reality, they’re Misha and Nadezha, a pair of really deep cover Soviet spies, working for the KGB to obtain information on the “Star Wars” project as the Cold War goes through one of its tensest periods.. While the kids are real, their marriage is fake and as this show goes on, increasingly faker…

As you know [Danger! Cliché alert! – Ed.], I’m a big “fan” of the Cold War and once developed a Cold War set spy sim at AJJE called Covert-81; a plan to do another at Phoenix did not generate sufficient interest to go forward. Thus when this FX series came to the UK, I was all over it like a bad toupee.

I’ll start with Philip – played by Matthew Rhys. Rhys is a British actor playing a Russian playing an American; as the two leads speak English at pretty much all times (they have to), he just has to do an American accent. Fortunately, he has plenty of experience in this; he spent five seasons playing Kevin Walker in Brothers & Sisters for ABC and I didn’t even know he comes from Wales until I read about it.  Definitely the more westernised of the couple, Philip struggles with his liking of the US with his duty to the Motherland and Rhys turns in a very strong performance.

His ‘missus’ Elizabeth, played by Keri Russell (who I initially mistook for Kelli Williams from Lie to Me – Doh!) is definitely the more dedicated to the cause of the red flag with the hammer and sickle on. She’s ruthless and also not one to take any nonsense, especially from their handler “Grannie”. I’m not familiar with Ms Russell from any of her previous works (although according to the autocomplete on Google, somebody really likes her feet), but based on her turn here, I’d probably like them… and that’s not a comment on her raunchier scenes.

They aren’t the only regulars in this piece, the action also follows the FBI counter-espionage unit looking into the activities of ‘Directorate S’, the KGB directorate running all of these ‘illegals’. In particular, the Morris’ next door neighbour, Stan…

Stan is a key part of the whole story; early in the run, he blackmails an officer at the KGB Rezidentura called Nina to spy for the Americans – threatening to shop her for under the table caviar sales. Nina doesn’t get a surname in this run, but there is a good argument for it being Myersovska… because this series demonstrates quite conclusively that if you work for the US government, you should never  trust a woman with a name that ends in –na. Nina (Annet Mahendru, half-Russian and half-Indian) is a saucy little lady, the show’s Comrade Fanservice, although both the leads get a good deal of action in that department. Stan ends up having an affair with her. However, things don’t go entirely to plan…

As mentioned, this takes place in 1981 with the USSR concerned that the Reagan administration is going to attack them and wanting to find out about the Strategic Defense Initiative (aka Star Wars); with Philip and Elizabeth having to engage in a number of intelligence operations to do so – including getting a maid to put a bug in the private office of the US Secretary of Defense, basically by making her son seriously ill and threatening not to cure him if she doesn’t (she complies). These spies are not nice people when it comes to business, that’s for sure – we even get an assassination with poisoned umbrella. In addition, Philip seduces a FBI employee by pretending to be from internal affairs… so he can get her to give information to him.

Things however get a bit more serious when a rogue KGB faction kills a US scientist and three FBI agents… so the two services start with a series of tit-for-tat assassinations. This involves the shooting of Elizabeth and Philip’s KGB mentor and later a KGB officer in DC being killed by Stan after the death of Stan’s partner… a move that makes Nina go triple. Like I said, don’t trust a Nina.

Overall, it’s a thrilling story of twists and turns, but not too fast for comfort… indeed, it can get a bit slow at times. One also has to suspend disbelief over the central premise, as the KGB never actually did anything quite like this (before anyone says Anna Chapman, she never pretended to be a Westerner by birth).

Not being old enough to remember any of the 1980s, I can’t vouch for the accuracy of the on-screen portrayal of it, but it looks convincing, as does the hairstyles. With Sydney Bristow having retired from the business of espionage (ironically, her mother was a deep cover KGB agent), the Morris have acquired her wig collection and we get to see a number of them on their heads, although quite how one stays on Philip’s while he’s making out with Martha is a mystery that even a KGB archivist can’t answer.

-          ‘The Americans’ is a highly entertaining series, once you “suspend your disbelief” as the imperialists say. It does drag a little in places, much like a Lada.

-          I would recommend this show, although I am not sure that it will remain on the main Independent Television channel. You see, it got just over a million viewers for its finale; fewer than watched ‘Celebrity Big Brother’… or ‘That Puppet Game Show’.