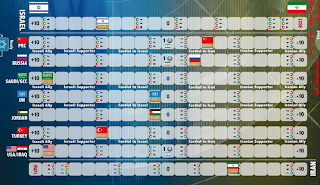 The political situation as of the end of Turn 15

The game is now heading towards its conclusion – as things go from bad to worse for Iran.

The situation for the Islamic Republic of Iran was distinctly not good. Only 22 aircraft were available for operations and in the southern sector where any US attacks would be coming from, there was one solitary MiG-29 ready to deal with anything.

As a result, when a squadron of F/A-18s combined with two Growlers packing SEAD loads were launched against the Zirconium Plant at Isfahan, the Fulcrum pilot decided that he was not going to risk the inevitable destruction of his airframe by attacking the raid.

Four F-7Ms, however, were more into valour than discretion and decided to engage, three  being blown away at range by AIM-120Ds.

Most of the available Iranian jets can’t engage at anything further than dogfight range; the best stuff they have on their own is the F-14 (designed for bombers), the MiG-29 and the F-4 in that order of relative quality; the first has major maintenance issues.

There was however a glitch waiting for the Americans; while they had launched a Suter attack on the Iranian air defence network, they had only been able to suppress one of the two local I-Hawk sites. This now fired and damaged a Super Hornet, forcing it to make an emergency landing in Saudi Arabia. Even worse than that, it was the sole aircraft aiming at foundry B3.

The strikers reached their target and the Growlers fired their HARM missiles at two the Pantsyr launch vehicles, destroying one of them, but the other managed to avoid destruction by shooting down the missiles itself. There were still 24 SAMs available and these managed to stop the destruction of one of the primary targets, resulting in a mission failure for the US.

The Hornets headed out and with only six aircraft available in Sector 2, none with BVR missiles, the Iranians chose not to engage. The MiG-29 in Sector 3 did chose to fire and unable to get into firing range to Growler jamming was sent home with a damaged tail between its legs.

With Iran’s political good will somewhat limited at the moment, there was nothing it could to stop the strike now heading its way through Turkey.

Iran was done to only one Political Point at this time; with none of its cards only needing that. It really needed to move Turkey’s opinion track to +4 or lower to prevent the two squadron Israeli strike on Arak… it was now powerless to stop the rest of the Israeli actions this turn.

The 47-plane attack bound for the Heavy Water Plant at Arak crossed the Turkish border, avoiding the S-200 site guarding the plant entirely and with some of the F-15s managing to suppress both I-Hawk sites in the area. The Iranian response was four F-5Es… who took one look at the size of the raid, which included F-16s in a dedicated escort role, and decided not to even bother.

The dedication of some of the F-16s to the mobile short-range SAMs resulted in two of them being blown away and the rest of them entirely distracted by swatting STAR-1s. The F-15s came in with their bomb loads of Small Diameter Bombs and tore the Heavy Water Plant to shreds… not a single building was left standing.

The aircraft left and ran into three groups of interceptors, two Tiger II pairs and a pair of MiGs. With their escort load out of six AIM-120s, it only took one Falcon to deal with each of the former and two to deal with the latter – in each case, one pilot ejected and the other had to fly a damaged plane home.

The Israeli jets can pretty much self-escort at any rate, but if you dedicate a plane to that role, then it will be a really powerful air-to-air machine.

While there was no political boost for Israel domestically, they were able to secure a firm agreement from the US to see this operation through, whatever it took. With Iran’s aircraft breaking down again, it was now going to be facing two days of US air attack…

Firm Commitment, which locks an allied opinion track for up to nine turns (eight in this case) actually turned up in the Israeli hand previously, but it was neither possible or desirable for Israel to play it at this point. The two squadrons here will be unavailable for further strikes until Turn 19, but there will be a few US strikes and two F-16 squadrons are currently available for operations (a look at the Errata states that tankers don’t go through the availability cycle in the same way due to their shorter flight times).

Israel gained four political points from its strike. It is now increasingly likely that Israel will, if it can destroy other Iranian sites, win the game.