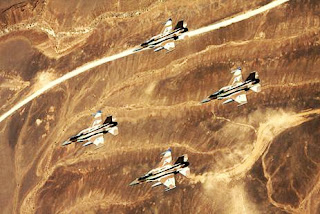 The US Navy now launched a Super Hornet strike to destroy the small Fuel Manufacturing Plant at Isfahan; with only two facilities there to take out, this should have been a relatively easy task for them to do. The Americans took precautions, dedicating two of their Hornets as fighter escorts and tasking four for SAM suppression, along with a Suter attack to degrade the air defences.

However, things started to go a bit wrong at this point. After a F-14 was destroyed at maximum range when it tried to intercept the Rhino force and the F-5s chose not to engage, the Americans discovered the hard way that they’d failed to suppress one of the I-Hawk sites. It fired at one of the strikers and blew it out of the sky, killing its pilot.

I-Hawks have a 60% hit chance against Hornets with a strike load out; indeed they’re the most vulnerable Western aircraft in the game.

The Growlers destroyed one of the SA-22s, but the others present managed to shoot down enough of the bombs so that both buildings were only damaged. The Iranian going away party consisted of four F-7s followed by four F-5s; none of them got to engage but the single Hornet tasked with the first lot had to use a Sidewinder to destroy the final Fishbed after running out of AIM-120s. The result to the Iranians was four destroyed (one KIA) and four damaged. Another group of F-5s chose not to join in with this one-sided battle.

Despite the loss of the F/A-18, the Israeli support for this campaign was further increased.

The Iranian response was a coordinated eight Shahab-3 launch against Israel, of which one managed to get through three layers of defences before the final Patriot PAC-3 one stopped it dead.

Iran used two Military Points to coordinate the attack and ensure the missiles had to be engaged as one group.

Now came the Israeli attack on the Arak reactor; the cyber-attack took down all the local SAM defences, the fighter response was non-existent… then the SAM vehicles remaining after the SEAD F-16s took out two more Pantsyrs managed to stop the Israeli striking from even damaging the two biggest facilities… making the mission a failure.

Things got worse as the two squadrons headed home; two F-5s turned up and were merely blown away at long range, but then, somehow two F-14s got into dogfight range before the escort F-16s could even react. In the ensuing melee, one F-14 went home, one was destroyed… and one F-16 pilot had to eject. The latter landed, found herself swiftly captured by the IRIGC… and was facing the full Tehran hospitality.

I rolled a 99 on the approach roll for the Tomcats, who then fired all their weapons at once and one of them got a hit (on a 5 or less chance!), forcing the Netz pilot to eject.

Further diplomatic moves, including in the UN by Israel had no effect. As night fell, Iran felt more confident it might ride this one out…