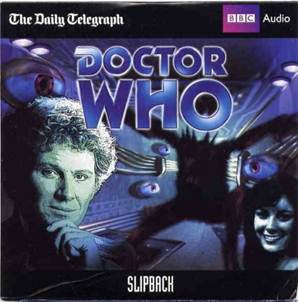 A lot of Doctor Who fans do not like Eric Saward. His stories are frequently poor, his era was responsible for some of the show’s biggest turkeys and the manner of his departure really rankles. Anyway, I’m reviewing something he wrote as my “Eleven Faces” series does its second Sixth Doctor story – the radio drama “Slipback” from 1985, the first proper foray of the show into radio, broadcast as part of children’s’ magazine show Pirate Radio Four. Is it any good though?

The Doctor and Peri land on a starship where the computer has gone crazy and the alien captain is dangerously ill. Dangerous to other people.

The plot here is a mishmash of different ideas and characters that does not fit together that well when the final twist is revealed. For one thing that final twist contradicts two other stories that Eric Saward script-edited. The pacing is off badly, some cliff-hangers get resolved in a stupid manner and Saward commits a major editing failure when he has the TARDIS appear to materialise twice. In addition, a whole batch of clichés get taken for a ride, including a homicidal computer, although that one is done rather well in my opinion. I’ve not got a great deal good to say about this, except that it is only sixty minutes long.

Also, you would not get away with this line (Peri discussing the TARDIS) in any show intended for children today:

“It started to wink and flash and grunt like some dirty old man in a park”.

It’s a BBC production, so excellence is assured. However, since one takes that sort of thing for granted, it really doesn’t boost the story. There are some 1980s style music stings here, which also has a net zero effect.

The Sixth Doctor really needs a good script to work – and he doesn’t get one here. He starts off with being naïve about the effects of alcohol and later on has a big “Noooooooo!” in a cliff-hanger, neither of which really seem Doctorish at all.

Peri, apart from being lusted over by yet another alien creature, doesn’t do anything remarkable here either good or bad. In fact, she’s largely forgettable in audio.

A bit of a mixed bag here, that’s for sure. The computer and robot characters do very well with the script, especially the former, who has a ‘New York’ accent that works well with the personality. Even if it is a bit of stereotype.

The organic characters generally stink (you can’t even remember most of their names), with the exception of the Captain. Played by Valentine Dyall (also known for playing the Black Guardian, but having a voice that has led to people calling him “the British Vincent Price” meant he had a long career), he is superbly slimy, literally and metaphorically, in one of his final roles before his death – this in fact went out posthumously.

I totted up my scores for each of the episodes and came to an average of 4/10. However, as I felt really rather cold with this story and there isn’t really much good in it, I knocked my score down to: