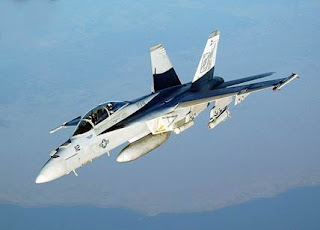 It’s been a while, but I’ve managed to get another turn done for this game.

As the sun set on the third day, 14 US naval jets were preparing for an attack mission – the destruction of the S-200 site guarding Isfahan. Eight Hornets would be tasked with suppressing the two I-Hawk units guarding it, while four more would accompany two E/A-18G Growlers on the main strike.

Rolled a US airstrike. I considered going for the S-200 and the I-Hawks with a strike each, but decided that was against the spirit of the rules.

The suppression Hornets did their job and while the S-200 got a shot off at a Growler, it was easily dealt with by the jamming systems on board. However, the US had a slightly bigger problem as two F-5Es from 41 TFS headed in to intercept. However, it wasn’t that big a problem as the Tiger IIs were spotted early with one being destroyed (the pilot survived) and the other going home damaged, reducing 41 to only 7 available aircraft.

The main element launched 2 AGM-88 HARM missiles against the main radar and that ended that.  With the I-Hawks down, the Iranian sent another solitary F-5E to go against the strikers, but it too was sent packing. Then the second lot of interceptors came in – two pairs of F-4s (three from 92 TFS and one from 62 TFS respectively). One Hornet each broke off for the enemy aircraft.

The US crossed two air defence sectors on the flight in and the flight out, so Iran got two intercept chances  - although it lacked alert aircraft in the southern sector for the inbound strike. I actually rolled for three pairs of aircraft, but there weren’t the available jets in that sector for that. The order of the latter two attacks were determined randomly.

The first strike was from 2 aircraft from 92 Tactical Fighter Squadron. The Super Hornet fired one missile at each of them and four Iranian aircrew did a parachute jump compliments of the US Navy. The other element actually got into dogfight range, but two Sidewinders resulted in something similar – although only two lived to post on Experian about it. 62 TFS was down to 9 aircraft, but 92 only had four.

16 Iranian jets broke down in additional, leaving 55 aircraft available for operations. They would need many more as the main Israeli strike on Isfahan loomed.

I realised I’ve been reading the breakdown rules incorrectly – it’s one roll for the entire IRIAF with the results applied to all the active squadrons. While I continued to use the old method for this turn, I’ll do the quicker and proper method next time.

Israel is doing very well internationally, but we are now a third of the way through the game and they need to start influencing the Iranian opinion track in a big way to win this game.