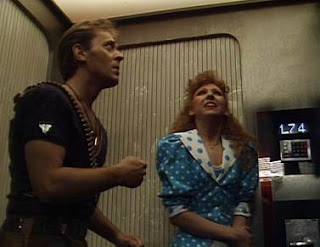 Everybody gets sick of lift music eventually

The condition for the show’s renewal was the replacement of its star – Michael Grade insisted that Colin Baker go over the objections of John Nathan-Turner.

JNT had been informed that he would reassigned from Doctor Who in exchange for being the one to tell Baker he was going, something he had hoped would happen after the production problems of Season 23. However, that agreement was rescinded by his superiors and he would have to remain on the show. He now faced a situation where he had no star, no script editor and no stories.

An agreement was reached between Grade and JNT that Baker should appear in an opening four-parter where he would regenerate, so Pip and Jane Baker were commissioned to write what was then called “Strange Matter”. However, Baker declined to even appear in a regeneration sequence and any hope of him changing his mind was ended when he had a public go at Grade in an interview with The Sun. So, in the end the new guy would have to wear a wig for the opening scene…

The search for a new Doctor very quickly settled on a comic actor and performer named Sylvester McCoy – although others were auditioned (all alongside Janet Fielding, who had played Tegan[1]) at the BBC’s insistence.

Getting the script editor was somewhat easier – although the choice was an unlikely one, a Canadian-born man called Andrew Cartmel who had graduated in computer science and gotten an agent based on some unproduced scripts. Cartmel began working with the other writers on what has been called “The Cartmel Masterplan”, an arc that restored some of the mystery to the Doctor and would have eventually revealed his true identity had not cancellation intervened – the Virgin New Adventures novels cover much of the planned ground.

The Seventh Doctor does not rate as highly as some of the others, but he has his fans. Starting off as an intelligent man who disguised his intelligence with clownishness, he later developed a darker personality, becoming a grand manipulator of events and people, including companions, to achieve a greater end (he really liked chess too). Usually seen with a Panama hat and a question mark umbrella used for purposes other than protection against rain, his costume became darker as he did. It’s a strong point of the EU that the other incarnations of the Doctor don’t like him. He is also the first Doctor with a noticeable regional accent, hailing from Dundee and using a slight Scottish lilt – he also liked to roll his Rs.

Percy James Patrick Kent-Smith (1943-present), far better known by his stage name, started off life training for the priesthood, but then chose to went into insurance. After a variety of jobs, including working as a bodyguard for the Rolling Stones, he was spotted by comedian Ken Campbell working in a box office and became part of his comedy act. There his most notable role was as stuntman ‘Sylveste McCoy’, who liked to put ferrets down his trousers and explode bombs on his chest. As a joke, the programme had the character as being played by Sylvester McCoy and when a reviewer thought that was a real person… you get the idea.

More work followed, including a two-year stint on ATV’s anarchic Saturday morning show Tiswas and just before DW, appearing in a B-movie called Three Kinds of Heat, where his character killed Mary Tamm’s one.

After his tenure, he has mostly focussed on theatre including appearing in a Royal Shakespeare Company production of King Lear, but he still does TV and film work. Recently, he appeared in an episode BBC daytime soap Doctors playing an actor who had done a role similar to the Doctor – the part written for him. His biggest role to date, however, is as Radagast in Peter Jackson’s The Hobbit trilogy.

He likes to recite Matt Smith’s speech from “The Pandorica Opens” at conventions – and does it very well indeed. Finally, he is the second Doctor that I have actually met.

The 14-episode Season 24 was moved from Saturdays to Mondays – directly opposite the nationally-aired Granada soap opera Coronation Street… a show that it did not stand an ice cube’s chance on Venus of doing well against. Indeed, the modern show would struggle in a slot like that, although DVR would help it… However, it must also be said that this is probably the weakest of the three McCoy seasons.

The show also got a new title sequence and version of the theme tune, arranged by Keith McCulloch. For the former, McCoy’s face was painted silver for some reason.

Time and the Rani (4 parts)

The Rani brings the TARDIS to the planet Lakertya, in the process forcing the Doctor’s regeneration[2]. There she wants him to help her complete a machine that will allow her to use history’s greatest minds to reshape the universe.

The final Pip and Jane Baker story; this one has a dire reputation and came 198th in the Mighty 200. Featuring bad dialogue ('I have the loyhargil - nothing can stop me now!') and the Rani impersonating Mel, the excuse that they were writing this story ‘blind’ does not entirely wash. Sue Perryman handed this one a -1 on The Wife in Space; her lowest score to date.

Some very interesting concepts in this one, but it’s let down by a lot of bad production decisions and acting. This one also has two cannibal grannies, something which probably isn’t best for a show like this.

Delta and the Bannermen (3 parts)

Team TARDIS wins a free trip to Disneyland in 1959 on an alien tour bus. However, the tour bus gets hit by a satellite and ends up in Wales, where a beautiful princess is on the run from her would-be killers…

Guest starring Ken Dodd[3], this has been described as Hi-de-Hi![4] directed by James Cameron and has some surprisingly adult moments in it. Might watch this again sometime. Bonnie Langford considered leaving mid-season and a character was written as a potential new companion here –the end, she stayed a bit longer.

Sabalom Glitz ropes the time travellers into a treasure hunt on the space trading colony Iceworld, ruled by a literally cold-blooded criminal.

An at times chilling [Ba doom tish – Ed.] story that contains an awful literal cliff-hanger moment (the Doctor for some reason hanging off a cliff by his umbrella – after climbing off it[5]), the villain’s face literally melting, an in-joke reference to a 1983 media studies book on the show and Mel for some reason deciding to leave to tame Glitz, although her leaving scene is very good. Her replacement is a waitress who may be 16, but certainly acts a lot older…

Ah, Ace… the companion who is arguably closest to the modern five ladies of Who. She certainly has the sass for it, but Amy Pond never carried around home-made high explosives or had a go at a Dalek with a baseball bat.

Hailing from Perivale, West London, after blowing up her school and being a generally troubled teen, Ace was swept up in a ‘time storm’[7] and ended up on Iceworld, where she got a job as a waitress and slept with Glitz[8]. She goes with the Doctor (who she calls “The Professor” over his repeated objections) at story’s end, travelling with him through cancellation. As she was the companion as the hiatus arrived, Ace’s expanded universe appearances are extensive – although she still turns up in Big Finish stuff.

The role went to Sophie Aldred (1962-)[9], who had in fact auditioned initially for another character in “Delta and the Bannermen”. Aldred had started in children’s theatre and most of her work outside of DW (before and after) has been for young kids, although she started by singing in working men’s clubs to get her Equity card. She is currently voicing CBeebies series Tree Fu Tom – alongside David Tennant.

The average rating ticked up to 4.9 million, but the show never troubled the 6 million mark – with the highest figure all season being 5.5 million for the first part of “Dragonfire”, which aired on the show’s 24th birthday. However, the show was safe for the time being and BBC management were happy with their new star.

For the 25th season, two monsters would be returning. One story would be considered a classic, but the other…

[1]Bonnie Langford was unavailable due to other commitments. McCoy’s audition tape with Fielding, a companion departure scene, got its script largely re-used for Mel’s departure at the end of this season – it was that good.

[2]The precise reason for the Doctor being ‘killed’ and Mel surviving isn’t made clear on the screen, but it is stated in the EU that he hit his head on the console.

[3]A British stand-up comic and singer, who specialises in one-liners and has the world record for the longest joke-telling session at 3½ hours.

[4]BBC sitcom (1980-1988) written by renowned duo Jimmy Perry and David Croft, set at a holiday camp in Essex and revolving around its staff, mostly struggling or past-it entertainers.

[5]It made sense in the script – the passage was a dead end. However, it was really badly shot)

[6]Ace’s surname is never given on screen, but is given in the novels. The production team used Gale internally and eventually her full name become Dorothy Gale McShane. We just call her Ace.

[7]The Wizard of Oz parallels were quite intentional, although the stuffed dog idea was dropped.

[8]That was in the production notes only and never even hinted at on screen for obvious reasons.

[9]Most teenagers on TV are played by fully-grown adults for a number of reasons, including legislation on child actors. Somehow we adjust to it.