The colours of space-time ('Doctor Who', the comic strips) 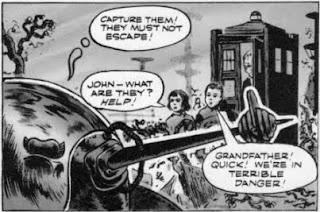 More than one grandchild?

The rich and varied worlds that the Doctor has been to in the over thousand years that he’s lived haven’t always been brilliantly realised on a BBC budget. However, what you can’t do with a BBC budget you can do, if you fancy still frames, with paper, pencil and (sometimes) coloured ink, making the Time Lord while not the most popular choice for the graphic novel, certainly a prolific one.

In addition, the show has been ripe for cartoon parody, but we are generally not focussing on that here. The dates given are those that the Doctor Who strips appeared in the work; not their running dates. I will not be covering the annuals; although these have had many comics in.

Originally owned by Lord Beaverbrook[1], then run by Polystyle Productions from 1960 onwards, TV Comic was a weekly production (aimed at young children initially) that ran from 1951 to 1984. It contained a great many comics based on TV shows airing in the UK, both domestic and foreign.

Doctor Who made its comic debut here in #674 on 14 November 1964, featuring the First Doctor and his grandchildren, John and Gillian… they eventually left to go to university on an alien world (although were referenced or homaged in some other EU works). The strip ran through to Tom Baker, although the last ones of his were reprints of stories from the former Doctors with the art changed – TV Comic was going downhill considerably at this point. In 1979, Polystyle lost its comic rights to Marvel UK.

This was not the only Doctor Who-related comic at the time – TV Century 21 (1965-1971, when it merged with Valiant), a science-fiction focussed children’s magazine, especially on Gerry Anderson’s Supermarionation shows[2] ran for 104 issues a strip covering the early history of the Daleks up to their discovery of Earth – a history rather at odds with later established TV canon, although it did pre-figure some later elements e.g. flying Daleks.

Credited as by Terry Nation, but mostly written by David Whittaker, this comic did not feature the Doctor due to right issues. It was reprinted (sometimes under the title The Dalek Tapes) in Doctor Who Magazine and in 1994 released in complete form as a paperback.

For two years, Polystyle’s Doctor Who strips went to another comic; which went under various names. This science-fiction focussed work took the rights for Anderson’s works when TV Century 21 closed; it reprinted a good many works from the latter, but also had some pretty technical non-fiction articles on the space programme in the Salyut 1 and Skylab era.

However, a batch of problems in production – printing on high quality paper made it the most expensive comic on the boys’ market – combined with a mistaken focus on puppet-based shows that were now off-air[3], led to the comic’s failure. After 58 issues, it launched on newsprint TV Action  and did strips based on the stuff that was actually on e.g. Mission Impossible and Hawaii Five-O, but that lasted another 74 issues before closing.

Doctor Who, as it was still popular (it featured in every issue), returned to TV Comic.

Britain’s most high-brow ratings magazine ran a Gary Russell-scripted Eighth Doctor comic strip in the 42 editions following the TV movie – but it was intended to run for 60. A change of management at the magazine led to the strip’s cancellation – the fifth 10-part story, “Deceptions” was abandoned and the comic finished abruptly with the two-part “Coda”.

The Marvel universes are truly huge with a prolific number of characters… and the Doctor is counted as one of them. Doctor Who Magazine, beginning as Doctor Who Weekly in 1979 has been published continually since then; it is available in most larger newsagents in the UK and is the longest-running official TV series magazine in the world. Originally owned by Marvel UK, the magazine was sold to Panini in the late 1990s –and the Doctor crossed over with a number of lesser-known characters from other comics in non-DWM works[4] .

The magazine, while maintaining editorial independence, has a strong link with the BBC – the show runner has a column in it and it breaks exclusives like episode titles. It has run a comic strip since day one that has featured all eleven TV Doctors (it has now started its first Eleven and Clara story); it was offered the chance to regenerate McGann into Eccleston but declined as the restrictions imposed on it (e.g. Nine could only travel with Rose) were too great. It generally runs multi-part stories with strong arcs in them; the strip has been all-colour for a long time with high quality art work.

The strip also featured the first companion ‘of colour’, Sharon Davies[5] – who pre-dated Mickey Smith, the first such one from the TV series, by over a quarter of a century. In addition, it featured other original companions, such as Frobisher, a shape-shifting penguin.

A large number of book compilations are available for purchase. In addition, DWM currently runs a one-panel gag comic in each edition called Doctor Whoah! with comedic alternative scenes and characters with no pupils. When Nick Courtney died, all eleven Doctors (with no pupils) were shown saluting him.

A BBC Magazines publication aimed at young children, published fortnightly and with a comic in each issue. This also comes with a free gift, which is probably the reason it is only available in the UK and Ireland.

Idea and Design Works have published a number of DWM reprints and original works since 2007 in the US (they have to be imported by UK readers – I picked up my copy of the book version of The Forgotten in Toronto); including the monthly release unofficially called Doctor Who Ongoing. They have also done mini-series, including:

·         The Forgotten (2008-9); a six-part tale featuring all then Ten Doctors, related as the Tenth Doctor, who is with Martha here, having to remember past incarnations to recover his memories.

·         Star Trek: The Next Generation/Doctor Who: Assimilation2  (2012): The first official crossover between the two franchises, this tale sees Eleven and the Ponds enter the TNG verse to team up with Picard against the Cybermen and the Borg[6].

From still frames, we return to the original live-action… the stage appearances of the Doctor, where if you accidentally say “sexual air supply”, the reaction will be immediate.

[1]A highly influential British press baron, William Maxwell “Max” Aitken, 1st Baron Beaverbrook (1879-1964) served as a minister in both World Wars, including as Minister of Information and turned the Daily Express from a failing paper into the most popular in the UK – with a strong focus on gossip, publishing many a lurid detail of the affair between Edward VIII and Wallis Simpson, which led to the former’s abdication as King to marry the latter. That paper later left the Beaverbrook Empire and is now owned by porn baron Richard “Dirty” Desmond, gaining a reputation for being vehemently anti-EU, combined with an obsession over the death of Princess Diana.

[2]Thunderbirds, Captain Scarlet, Fireball XL5 etc. – these are still well known due to repeats in the 1990s.

[3]Viewers with access to full colour TV (although there were still a good number of B&W sets out there) didn’t want puppets anymore – Joe 90 lasted one season and 1969’s The Secret Service got canned by ATV head Lew Grade when he saw the pilot; it was allowed to complete and air the 13 in production or complete. Grade felt the latter was unsuitable US sale due to its lead character’s use of gobbledygook; it got a negative reception in the UK and only aired in three of the ITV regions. Anderson then moved to live-action, but his days of greatness were pretty much done.

[5]Her surname was not given in the strip – that comes from a Marvel comic book.

[6]Although no Captain has appeared in Doctor Who and no Doctor in Star Trek, Sir Patrick Stewart did play Claudius to David Tennant’s Hamlet in 2009.