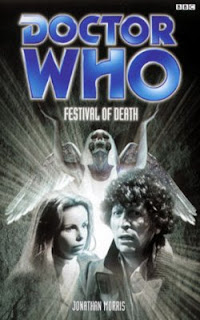 The “Eleven Faces” series continues with my second Fourth Doctor work and this time, it’s about time… and zombies.

As part of the 50th anniversary celebrations, the BBC has done new editions of some of their novels, one for each Doctor. For the Fourth Doctor, they picked Festival of Death from 2000 – and I can see why. It’s a classic tale that could easily fit into the modern show.

This is a Fourth Doctor, Romana II and K9 novel, set during the Williams era of the show (i.e. Season 17) and emulating its style considerably.

The Doctor and Romana arrive on the G-Lock space station in 3012, a former liner that got stuck in the exit from hyperspace – its crew and passengers mysteriously vanishing. This is home to “The Beautiful Death”, where people can experience what it is like to be dead… but something has gone wrong and its participants got turned into zombies… The time travellers arrive after the disaster and its containing, where they are thanked for saving the station. Which they haven’t done yet… They also learn that the Doctor died in the process…

·         The regulars are captured excellently; their voices are authentic and you never feel they’re saying things they wouldn’t say.

·         There are some superb supporting characters, including a suicidal computer that would not be out of place in a Douglas Adams novel. In fact, this owes a good deal to Adams.

·         The timey-wimey plot is done very well indeed – it was planned with the aid of a big diagram for one thing.

·         There are a couple of lovely little references to other works – including a mention of Murgatroyd (a cat-like creature from Murray Leinster’s Med Ship series, which I’ve read) and a planet from the Elite computer game.

·         I found some of the plot a little hard to follow and didn’t get one factor of the zombies.