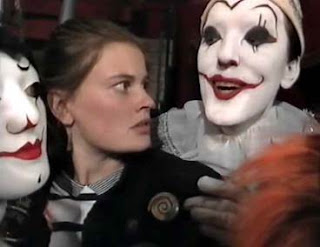 I don’t know why I came here tonight…

After the turmoil of the previous two seasons,  Doctor Who now entered a relatively stable final two years. Producer, script editor, Doctor and companion would not change until the axe fell on the show, although this was not for want of trying on the part of the first, who was still trying to get reassigned.

With the first year of clowning past them, JNT and Cartmel started to move the Doctor in their planned darker direction – Cartmel briefing the writers to cast doubts on what was known about the Doctor’s background in their stories. As it was the 25th anniversary, Nathan-Turner also wanted to bring back the two biggest villains from the show – the Daleks and the Cybermen – something he managed to do.

Season 25 saw the show move timeslot again – from Monday to Wednesday. However, it was still against Coronation Street, a place it really did not want to be[1]. The plan had been to start Season 25 in September 1988, but coverage of the Seoul Olympics forced the start into October and meant the season did not end until 4 January 1989… which forced a change in running order, namely the swapping of stories two and four, as JNT wanted to have “Silver Nemesis” air over the anniversary while still starting with a Dalek story[2].

There was one major problem during the course of production  - the near loss of “The Greatest Show in the Galaxy” after the discovery of asbestos in Television Centre caused a temporary closure. The circus-themed serial was saved by filming in tents erected in the car park of the BBC’s Elstree studios, but the delays ate into rehearsal time for “Silver Nemesis”.

This 14-episode run is an improvement over Season 24, by virtue of having a story that everyone agrees is good over four that divide opinion at best.

There was also a significant technological development in this run – the show started being broadcast in stereo sound as opposed to mono, albeit only in the London area until the TV movie. Doctor Who was in fact one of the first British shows to use a now-standard technology.

On the other hand, there are no TARDIS interior scenes in this season – the console room set being junked, although the console itself survived.

Remembrance of the Daleks (4 parts)

Written by Ben Aaronovitch, this has a strong argument for best story of the Seventh Doctor’s era. Some great scenes (a Dalek levitating up stairs and Ace having a go at one with a baseball bat[3]), some well-done visual effects[4] enhance an epic story.

The time travellers Terra Alpha, a world where happiness is mandatory and sadness is a capital offence…

A mixed bag of allsorts – pun intended, as this features the notorious Kandy Man, who resembled Bertie Bassett (a mascot for sweets) and provoked a copyright complaint to the BBC, which was resolved with a promise not to use him again. While the Doctor has a superb scene where he faces down two snipers (“Look me in the eye. Pull the trigger. End my life.”) and there is a subtle but obvious parody of Margaret Thatcher’s Britain[5] in here, the sets are lacking.

In 1638, the Doctor sent a hugely powerful statue into space. In November 1988, its decaying orbit brings it back to Earth, where a time-traveller, some Neo-Nazis and the Cybermen are out to get their hands on it.

The official 25th anniversary tale is far worse than the unofficial one (“Remembrance) - the lack of rehearsal time (which led to considerable edits to get the story to a proper length[6]) is not an excuse for silly characters, an unnecessary bit involving the Queen[7] and a tale with basic plot howlers like Ace walking around in a T-shirt in a British November.

Some interesting trivia: Nicholas Courtney makes a cameo appearance as a tourist here and this story was broadcast in its entirety in New Zealand on 25 November 1983, only the second time that the show was premiered outside the UK.

The Greatest Show in the Galaxy (4 parts)

After getting some junk mail from the famous Psychic Circus, the Doctor drags Ace along to see it. Ace is afraid of clowns and in this case, her fear is justified…

Heavy-handed parody of a certain segment of fandom aside (Whizz Kid), this dark tale was the one filmed in a tent and actually works better because of it. McCoy got magic training for some key scenes and turns in a great performance here, in a serial with a lot of good ideas. In fact, you could make something like this today, with suitable updating.

Season 25 saw an uptick in ratings to an average of 5.3 million, with every episode clearing four and a half million. This was a respectable performance and the show was renewed.

Unfortunately, while Season 26 saw further improvements, it would see a fatal decline in viewership…

[1]Being opposite Coronation Street is still not the best place to put a show, so a heavy hitter would not go against it – the listings for Wednesday 6 March 2013 had BBC1’s The One Show against its 7.30pm edition, a relatively cheap weekday magazine show.

[2]This caused a couple of minor continuity errors, as Ace is seen with an earring in “Nemesis” that she acquires in “Galaxy” and wearing a rucksack in the latter destroyed in the former.

[3]This scene, described by Aldred as one of the best moments of her life, inspired the entire Crowning Moment of Awesome section at TV Tropes. The Dalek casing actually got damaged as Aldred was handed a real bat by mistake.

[4]The serial ran £12,000 over its visual effects budget and the explosions in a climactic battle made the police think that a terrorist attack was occurring. This is in fact the debut of the ‘skeleton effect’ for exterminations – now used as standard.

[5]The “Iron Lady” does not tend to be popular among British TV writers and provokes considerable division of opinion still over 20 years after her leaving Number 10 – she is either the saviour of . I shudder to think what’s going to happen when she dies.

[6]An extended edition was released on VHS, but not on DVD.

[7]Played by an actress. JNT tried to get the real Queen and later Prince Edward to appear on screen, but was declined. He was also not allowed to film at the real Windsor Castle.