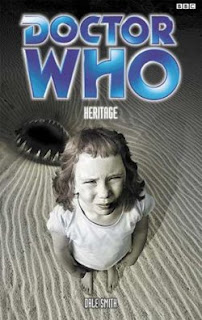 While Firefly was enjoying its short run on FOX in October 2002, a novel came out that in its own way was rather reminiscent of the series, as the Seventh Doctor walked into a plot that could have come out of Joss Whedon’s imagination…

As I’m moving slowly through my “Eleven Faces” series, I’ve now come on to the Seventh Doctor, Sylvester McCoy. I got this novel, the 57th in the BBC Past Doctors series. a few years ago when he turned up at a local department store (and it’s signed by him), but I’ve never gotten round to reading this in full. Two previous attempts petered out.

I’m glad I made the third attempt and stuck with it.

This is a Seventh Doctor and Ace tale, set after the end of the original run. In a previous novel, the Doctor learnt of the death of Ace and has been trying, subtly, to prevent it.

The Doctor and Ace are on the dusty (very dusty) failed mining colony of Heritage in the year 6048, where he intends to look up an old friend. However, they discover the locals are hiding a dark secret – a secret about murder and a child named Sweetness…

·        The novel drops the apparent violent death of a previous companion on us fairly suddenly – and does not pull any reversal on it.

·        Most of the novel takes place over the course of a single day – an interesting and well done concept, showing just what having the Doctor turn up can do to your world.

·        The Doctor has some superb moments – including a rather great retort about people who believe in the judgement of history being too scared to judge themselves.

·        The atmosphere and Western styling is superb, while the reason for the covering up of the murders is one that can be understood, if not necessarily agreed with.

·        There’s a great supporting character in the form of Bernard, a dolphin with a translator unit and a walking frame with mounted weapons.

·         As other reviewers have pointed out, there’s not a great deal that actually happens.

·         Sweetness is a textbook ‘creepy child’ and those are all too common in fiction.

A thoughtful and well-written tale, which is a worthy entry to the expanded universe. Worth buying if you can get it cheap.

(For my review of another Western-themed bit of Doctor Who, look here and here)