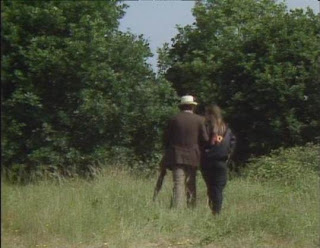 There were no further changes to the top people in the show for another season where Doctor Who was up against Coronation Street. JNT again tried to leave, but was told to stay in the producer role or leave the BBC. He therefore chose the former.

There was an increasing lack of money for the show – with the sole TARDIS interior shot being in semi-darkness to disguise the fact that the only ‘wall’ was a painted backdrop, all four stories being set (mostly) on Earth and a lot of ideas having to be scaled back as they were unrealisable. However, the Cartmel master plan was seemingly going very well indeed…

Season 26 is the most consistently good of the entire McCoy run – and indeed of the entire last five years of the classic era. Every story is at least good and two hold minor classic status in the fandom.

Materialising in England in the 1990s[1], the Doctor has to stop a powerful sorceress from another dimension destroying Earth, with a little help from a retired Brigadier…

The final appearance of the Brig in the main TV series (and he has some great bits in this), this is probably the weakest of the four, but still very well done. It’s notable for a bit of real-life heroism on McCoy’s part during the filming of the cliff-hanger to Part Two, where Ace is trapped in a rapidly filling water tank. The glass of the tank began to crack and he realised it was in danger of emptying its contents all over the studio floor and its live cables… yelling “Get her out of there!”, he alerted the crew, who got Sophie Aldred out before the glass went and then evacuated the studio. The story was slightly sensationalised in the tabloid press, but McCoy may well have saved somebody’s life[2].

In 1983, Ace burned down an old house. The Doctor takes her to it in 1883 and she discovers just why she was driven to commit arson…

This was the final story of the series to be recorded and therefore the final one of the classic era – as well as the final proper story to be filmed at Television Centre. It’s a very strange tale that probably needs a couple of watches to truly understand – and appreciate.

The Curse of Fenric (4 parts)

Northumberland, 1943. A secret based holding a powerful code breaking device is but one pawn in a bid for freedom by an ancient foe of the Doctor…

A dark Seventh Doctor classic, with some strong discussions on faith (especially with guest Nicholas Parsons[3]), the Doctor playing chess literally and metaphorically and the resolution of a lot of backstory points on Ace.

Perivale, West London, 1989 – the Doctor brings Ace home. But home is missing many of her friends…

For an unintentional series finale[4], this is a great way to wrap the classic run up. Strong effects, strong performances and a generally epic feel in the story written by first time (and so far only) writer Rona Munro.

The average for Season 25 was 5.3 million viewers. No episode in Season 26 even touched that… none even got over 4.5 million and the first episode of the season got a series low of 3.1 million. With an average of 4.2 million, the writing was on the wall and the production team realised it during the run.

Conscious that the show was possibly not going to come back for a while, if ever, a special closing monologue was recorded by McCoy on 23 November 1989 and dubbed on the final scene of “Survival”:

There are worlds out there where the sky is burning, and the sea's asleep, and the rivers dream. People made of smoke, and cities made of song. Somewhere there's danger, somewhere there's injustice, and somewhere else the tea's getting cold! Come on, Ace - we've got work to do![5]

Season 27, were it to have been made would have had Ace stay on as companion until the middle of the run (when Aldred’s contract expired) before being replaced by safecracker Raine Cunningham, who was never cast. The four planned stories [6] for this run were later adapted by Big Finish, with Raine Cunningham becoming Raine Creevy after Cartmel discovered someone of the former name really existed[7]. McCoy also agreed to do another year, which would have probably seen his departure – he would end up remaining in post until 1996.

However, no further commission from the BBC was forthcoming and the Doctor Who production office closed in August 1990. It was a spectacular run that any show would be justifiably proud of, but this Time Lord wasn’t done yet. Not by a long chalk.

As I’ve now reached the end of the classic run, I’m going to do one post in the ‘wilderness years’ up to the TV movie, then do several posts on the expanded universe, which is truly huge. Then I’ll do another post covering 1996-2005, before resuming up to the current run and then posting a conclusion, hopefully on the 50th anniversary itself.

[1] It is not explicitly stated when this story takes place, but the evidence puts it around 1997. We still haven’t got £5 pints though. Yet.

[2]The footage is on the Battlefield DVD.

[3]A man best known for light entertainment,  most notably BBC Radio 4’s Just A Minute and Anglia Television’s Sale of the Century – he’s been doing the former since 1967!

[4]Survival was not written as one, unlike a number of recent American episodes (including three CSI:NY season finales – the show was renewed after the first two, but is currently pending news after the third such go) that were done as such that they could effectively wrap the show in the event of cancellation.

[5]I used this quote as my introduction quote on the AJJE Games RP Into Time! And Space!

[7]These negative checks can take a while – Dr. Keller in Stargate: Atlantis took about half a season to get a first name (Jennifer) due to problems getting legal to clear one for her.