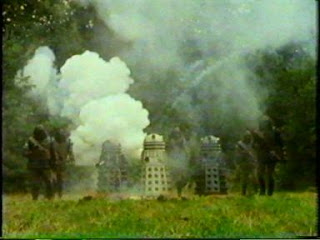 Back – for the first time in colour!

Season 9 was one of remarkable stability in the show’s history. There were no changes in the production team or the regular cast. With the new formula proving to be a ratings and critical success, Letts and Dicks saw no real reason to change it. That said, the Master would appear less, as would the UNIT characters. There would be more trips away from Earth – the Doctor could leave in the TARDIS on missions for the Time Lords, but they’d always send him back to Earth when he was done – making him, as he put it in “The Claws of Axos”, an intergalactic yo-yo.

Letts and Dicks had planned to move on at the end of the ninth production block, which would actually include Season 10’s “Carnival of Monsters”, but the BBC were so happy with their performance, they were asked to stay on.

To open the 26-episode season (one episode longer than Season 8), they decided on a nice publicity-grabbing gimmick. It was time to bring an old monster back…

Day of the Daleks (4 episodes)

The organiser of a crucial peace conference is attacked in the stately home that is hosting the event by a guerrilla who then mysteriously vanishes into thin air. UNIT, who are providing security, later find the guy unconscious in the grounds. Then his mates show up – carrying futuristic ray guns. They’ve come from two centuries in the future, where the Daleks rule Earth…

A timey-wimey fan favourite of Season 9, this Louis Marks idea got the Daleks added in fairly late by Robert Sloman (Terry Nation, who had commitments on The Persuaders![1], allowed someone else to write their first appearance since Season 4 provided he had script approval and a creator’s credit[2]). That said, the BBC only had three complete Daleks to hand and could only use two for the final battle scene. Subsequently, when the DVD release came out last year, 2 entertain[3] arranged for new footage to be shot with more Daleks in.

The Curse of Peladon (4 episodes)

The Doctor and Jo take a test flight in the TARDIS, landing on the planet of Peladon. When a storm causes the ship to fall off a cliff while they’re outside, the two seek shelter in a citadel, where they are promptly mistaken for delegates from Earth assessing the planet’s application to join the Galactic Federation.

A pretty good tale with a surprise twist on the Ice Warriors and the Doctor dealing with a beast by singing a lullaby to it, it’s generally held that this story is an allegory, intentional or not, about the United Kingdom’s accession to the then European Economic Community[4]. It was domestic politics, though, that caused a significant rating drop for episode 3 and 4 – a seven week miners’ strike that resulted in domestic power cuts, laying off of workers and the imposition of a state of emergency. Said strike was the inspiration for this story’s sequel in Season 11.

Also, the King in this story is played by David Troughton – Patrick’s son, making his third appearance in the show.

The Doctor and Jo go to visit the Master in prison, where they learn that ships have been mysteriously disappearing.

The first appearance of the Sea Devils, this well-remembered action story was done with a lot of assistance from the Royal Navy (much of it stock footage[5], but also actual use of bases). It features one of the only two times the full line “I reversed the polarity of the neutron flow” is used.

Also, this story was screened third, but shot second – the first time Who shot its stories out of transmission order, something it is now routine for the show. Before, the gap between production and airing was too small for this to be done.

The Time Lords send the Doctor and Jo to Solos in the 30th century with a message pod. There is a power struggle going on between the cruel Marshal that Earth has put in charge and the natives – the message will be of vital importance, if they can deliver it…

This Bob Baker and Dave Martin story was another political one, like Hulke’s “Colony in Space” from the previous season – this time the focus was on apartheid[6]. Views on this one are decidedly mixed.

The Master, disguised as a professor whose surname is Greek for “Master”, builds a device to try and take control of a creature who lives outside of time.

A story that I quite enjoyed when I watched it, “The Time Monster” is generally viewed by fandom as a bit silly, but it does contain a wonderful “moment of charm” (as Pertwee called them), where the Doctor relates to Jo, while they’re both tied up, a story about his childhood. Also, Dave Prowse, the body of Darth Vader, is in a monster suit in this, while the late Ingrid Pitt, best known for her Hammer Horror work, also makes her first of two appearances in the show.

The ratings, despite the miners’ strike, were good, with an average of 8.33 million, but they dropped significantly towards the end of the season.

It becomes necessary at this point to conclude with a history lesson. The 1970s in Britain were a turbulent time, with high inflation, rising unemployment, Northern Irish terrorism and frequent industrial action. The oil shock of late 1973 caused by the Arab oil embargo resulting from the Yom Kippur War[7], combined with another miners’ strike, led to the implementation of a three-day week. The Conservative government of Edward Heath called a snap election for the following February and the result was a Hung Parliament, with Labour having most seats, but second place in the popular vote. Labour leader Harold Wilson, who had been Prime Minister from 1964-70, got his old job back and called another election that October, with Labour just squeaking into an overall majority. This meant, in effect, no majority at all, with Wilson and his successor James Callaghan having to deal with militant unions who opposed their attempts to keep down wages and prices.

This was going to affect the show in more ways than one, not least in the budget department…

[1]1971 action series produced by ITC Entertainment for “ITV” (we’ll be discussing the unusual nature of that network later) in the UK and ABC in the US, starring Roger Moore and Tony Curtis as a pair of crime fighting international playboys. While doing very well in the UK and is considered a cult classic there, the US broadcast was put up against Mission: Impossible and did badly, resulting in the show getting axed after one season. Oddly enough, the cancellation freed Moore up to play James Bond.

[3]BBC Worldwide’s video publishing firm. 40% of the firm used to be owned by high street chain Woolworths until that company went bust in 2010.

[4]Then, as now, a very topical issue. When the Labour administration of Harold Wilson came into power two years later, it held a referendum on continued EEC membership, allowing its members to campaign on either side. The national vote went in favour.

[6]The South African policy was a big issue at the time – in 1970, public protest forced the cancellation of the South African cricket tour of England. The strength of feeling in British media union Equity at the time can be demonstrated by the fact that when South Africa got television for the first time in 1976, the union blocked the sale of any programmes featuring its members to the country, effectively barring any British television from being broadcast there and limiting SABC to American imports. In fact, Doctor Who still has not been sold to the country to this day.

[7]Israel was invaded by its Arab neighbours and came close to nuclear use before US supplies allowed it to turn the situation about.