All the Universe is a Stage (Review: 'Doctor Who', "The Crusade") 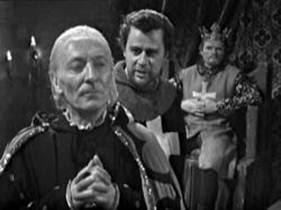 The Doctor sees great things ahead for Julian Glover…

Five minutes into a Doctor Who and a bunch of knights are discussing a situation in clear diction with flowing words. I think: I’ve walked into a Shakespeare play.

The second part of my classic Who watch/listen/read saw a change of plan as I decided to watch the stories on the Lost in Time DVD in broadcast order. This meant “The Crusade” comes first, way before “The Moonbase”.

Anyway… this story, broadcast from 27 March to 17 April 1965, is from Season 2 of the first run and only two episodes (the first and the third) of four[1] survive in video form, or rather 16mm film print. Episode 1, “The Lion”, only turned up in 1999 after being found in Bruce Grenville’s film collection. In fact, it’s the only incomplete story from Season 2, a time that the show was in one of its early peaks of popularity, averaging 10.4 million viewers over the run – this story itself averaged 9.4.

The DVD includes audio of episodes 2 and 4, as well as filmed links from the VHS release by William Russell[2] in character as an old Ian Chesterton, which puts one comment from The Sarah Jane Adventures regarding him in the questionable pile.

So, cast your mind back to the spring of 1965. Harold Wilson was Prime Minister, the US were just starting to get involved in Vietnam and the British public had only three TV channels. You finish watching Grandstand on a Saturday afternoon and then the next programme starts…

You’re watching the adventures of two schoolteachers who were abducted by an eccentric alien when they went to investigate the strange behaviour of his granddaughter (who he later threw off the ship) travelling with an orphaned young lady – will the teachers ever get home? What scary things will they encounter next? Daleks? Vikings? More weird ants [3]?

The story opens with the Doctor, Ian, Barbara and Vicki landing in a forest just outside Jaffa (now part of Tel Aviv) in 1190. A skirmish between Englishmen and Saracens breaks out, which results in Barbara being abducted. The other three go to help the wounded and run into King Richard I, getting caught up in politics as they try to get their companion back…

The moment the first bit of white emerges from the bottom of the screen and the Delia Derbyshire arrangement of the theme kicks in, you know this is a title sequence unlike anything else airing on TV then or really now. Video feedback is not something most people would think of using as a basis for a title sequence at any time. The theme itself from the first 17 seasons of the show is pretty eerie - in fact, some even found the white-noise-using tune scary.

The Hartnell era title sequence doesn’t go like the later era ones or today’s version. Instead of Doctor’s face, show title, story title, writer and episode, we get the show title only, then the music fades out much earlier than today. There’s a brief bit of action, then we get a musical sting with the episode title (no on-screen story title then) and the writer appearing as captions on the screen; which explains why it was that on the audio release of “Master Plan”. It’s interesting, but I do prefer the later title sequences.

Unfortunately the BBC make a big mistake here by only including the raw audio of the two missing episodes – this results in the final bits of episodes 2 and 4 essentially being a loud of sound effects, so I had to look up the various episode endings; however, the linking narrations from Russell really help things here. Also, you’ve got to love the Radiophonic Workshop’s sound effects and Dudley Simpson’s incidental music.

The 90-minutes or so of plot could today fill a 45-minute episode with its faster pacing. The story itself, a “pure historical” with no aliens at all, is a fairly lightweight one, a sort of Saturday afternoon serial kind of tale that while having a clever thing or two to say about prejudice, is ultimately a bit forgettable. David Whitaker, while doing nine stories for the show, never really produced a true classic, but then again, never produced a clunker.

That said, the climax is a rather good one, with Ian, who has managed to get himself knighted, using said position to rescue the Doctor.

Douglas Camfield’s direction, particularly during a fight scene in “The Lion” between Ian and a Saracen is good. The pacing of the opening skirmish is en par with the modern show, but unfortunately Camfield has to work with an older-style camera set up and set design. I’ll explain…

Multiple-camera set ups these days are largely limited to sitcoms when it comes to TV fiction. Not so back in the 1960s – Doctor Who’s studio scenes for much of its first run were largely done with multiple cameras, as indeed was most British television drama done in studio. This, combined with a “three-wall set” and a cast that has largely learned their trade treading the boards who play this like they’re in a massive theatre, combines to make watching “The Crusade” rather watching a play broadcast live – the camera isn’t quite in focus as episode three starts. While Doctor Who never went out live, it was recorded “as live”, complete here with rather sharp camera changes – I was reminded of Britain’s Got Talent. After listening to “The Warlords” (it’s a pity the sequence with Ian and a bunch of ants doesn’t survive), I watched episode 2 of “Master Plan” and the freer camera stuff and better design allows Camfield to do a much better job.

This one is entirely done in studio (at Ealing and Riverside Studios in Hammersmith[4]), even the outdoors scenes. The matte backdrops are noticeable, but you have to look for it.

William Hartnell hmms away nicely here, but also demonstrates some good flashes of anger at times. One interesting thing he does here is steal contemporary clothes from a shopkeeper, justifying it on the grounds that the guy has already stolen them. That is pretty Doctorish.

Maureen O’Brien’s Vicki is, well, not all that good – there are far better companions from this era. If you listen, you notice the slight Liverpudlian lilt to her voice – these days the accent would be a lot clearer[5].

Jacqueline Hill’s Barbara Wright has a rough time of it. The poor history teacher gets abducted in episode one and not really rescued until episode 4, with villain of the piece El Akir wanting to make her a member of his harem. The cliff-hanger to “The Wheel of Fortune” [One can’t help but think of the game show – Ed.] sees El Akir basically threatening her with a great deal of unpleasantness and then in the following episode, in effect allowing his guards to rape her, although she’s rescued before that can happen to her. You just would not have a scene with that happening to Amy today, no way. Full credit to Hill, who gives a good performance – the terror on her face is clear when El Akir threatens her.

William Russell’s Ian does very well in this serial; he only appears in a bit of “Wheel” as Russell was on holiday, but his other stuff is very well done. An unfairly forgotten companion, that’s all I’ll say.

The English characters are reasonably well done and include Jean Marsh (Sara Kingdom in “Master Plan”) as Joanna, Richard’s sister, who plays a key part in the plot.

Most standout of all is Julian Glover, just turning 30 at this point. Glover’s performance as a volatile Richard the Lionheart was in the early part of a long career, mostly playing villains, that has seen him grace this show twice and appear in Star Wars, Indiana Jones and James Bond – he’s most recently turned up in Game of Thrones[6].

We come to the other side and walk into a problem that proves very distracting, especially in “The Lion”. Basically, all the Arabs are played by English actors… most of them “blacked-up” (a couple of actually black extras can be seen though). “Blackface” continued well into the 1970s on British television – The Black and White Minstrel Show springs horribly to mind here, as does It Ain’t Half Hot Mum[7] – Doctor Who was guilty of it on more than one go. The serial only gets off with a caution as the Saracens are, mostly, sympathetic characters, particularly Saladin. All this said, Ibrahim, a petty criminal, is a walking cliché with bad accent to boot. While this story was sold abroad, it was never offered to the Middle East for, arguably justified, fear of causing offence.

The “pure historicals” didn’t really last past Season 4 – I can see why. The first two episodes drag badly and while things get better later on, there’s a lot better stuff from Hartnell out there. Even leaving the “blackface” out of it, I can only give this:

[2]Russell, now 88, is still with us and might be the oldest living companion actor.

[4]The main, but by no means exclusive home of the show for Seasons 2 to 4. BBC Television Centre at White City was also used, as it would be extensively from 1964 to 1989. Lime Grove got used for much of the black-and-white era as well – most of the first season was done there.

[5]Tom Baker, Lis Sladen and Paul McGann all hailed from Liverpool, but none allowed the distinctive accent full reign like Craig Charles in Red Dwarf.

[6]At that rate that show’s going, most of Equity will turn up sooner or later – Ed.

[7]BBC sitcom (1974-1981), created by renowned pairing Jimmy Croft and David Perry, revolving around the misadventures of a concert troupe in India during the Second World War. One of the key Indian characters is played by a blacked-up English actor, although in the show’s defence, he was born in the country, was partly of Indian ancestry and spoke fluent Urdu, at a time when big name South Asian actors were limited in the UK. This particular decision has contributed to the show being repeated a great deal less than Croft and Perry’s other works like Allo! Allo!, which for its part, breaks out the national stereotypes on everyone equally.