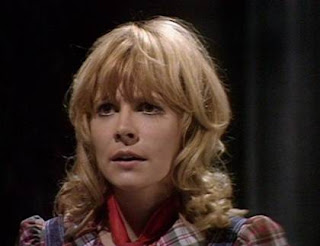 We have a Josephine now. Josephines are cool.

The 25-episode eighth run of Doctor Who saw the violence and horror in the show come under media and even Parliamentary scrutiny – which in a way was a bit ironic, because the now firmly in charge combination of Letts and Dicks made a conscious effort to make the show more family-friendly than Torchwood-esque Season 7.

A number of new elements were introduced to boost the show’s appeal:

·         A new second-in-command for UNIT’s British contingent, Captain Mike Yates (Richard Franklin). While Sergeant Benton[1], first seen in “The Invasion”, would stay on as a semi-regular, it was felt that Yates would be a more appropriate number two for the Brig. He was also a possible love interest for Jo, but that never really went anywhere.

·         The Doctor being occasionally allowed to leave Earth and go on adventures in space.

With the decision not to renew Caroline John’s contract as Liz Shaw[2], Letts and Dicks found themselves needing a new companion. They created one of the show’s most loved characters, Josephine “Jo” Grant. A more traditional, “What’s happening, Doctor” sort of assistant, Jo Grant got a job as a civilian employee at UNIT through her diplomat uncle. She took an A Level[3] in General Science, but she didn’t say if she’d actually passed the exam. After an initial bout of ditzy and a very bad first trip that involved getting hypnotised by the Master and near suffocation via plastic daffodil, she demonstrated a high degree of competence, some reasonably good action skills and a general enthusiastic loveliness about her (if Kaylee were a Who companion, she’d be Jo), which resulted in her reappearing in The Sarah Jane Adventures, becoming only the third regular human character from the classic era to appear in the new one.[4]

Katy Manning (1949-present) was cast for the role. It’s worth pointing out that Manning was extremely short-sighted and with soft contact lenses not being widely available at this point, she found herself frequently blundering into other actors or the scenery. Watch out for the times that Jon Pertwee had to lead her by the hand. Since her time as Jo, now Australian Manning hasn’t done too much notable bar an infamous NSFW photo shoot with a  Dalek and playing the sixth incarnation of drink-sodden Time Lady Iris Wildthyme for Big Finish – although she’s still popular among the fans.

Basically wanting a Moriarty to the Doctor’s Sherlock Holmes[6], Letts and Dicks created a new arch-nemesis for the Doctor, a renegade Time Lord known as the Master. In the first attempt of the show at an arc, this urbane mass murderer would appear in all five of the serials of Season Eight (this is not a spoiler). This version of the Master is definitely the most suave of the lot, who likes to catch up on a good book between his bouts of destruction and has a healthy respect for the Doctor.

Played by Roger Caesar Marius Bernard de Delgado Torres Castillo Roberto, usually known as Roger Delgado (1918-1973), a man of French and Spanish parentage born within the sound of the Bow Bells[7] with extensive stage and screen experience and who was much in demand for villainous roles due to his evil looks (including his goatee) after a role in TV series Sir Francis Drake, the Master became a popular baddie for the show and would make three more appearances after Season 8.

You’ve noticed the birth and death dates by now. A planned conclusion to the overall arc that would have seen the Master sacrifice his life for the Doctor in Season Eleven was prevented in tragic circumstances. On 18 June 1973, Delgado and two Turkish film technicians were killed when the car they were being driven in to a location shoot in Turkey for a later abandoned comedy called The Bell of Tibet went off a cliff.

The five stories of this run all bar one took place in UNIT time.

Terror of the Autons (4 episodes)

The Master arrives on Earth and steals a Nestene energy unit, beginning to reanimate the Autons. His goal, to destroy humanity…

Another story from the pen of Robert Holmes (who will get his own piece in Season Twelve’s article), this is an enjoyable season opener with some truly disturbing scenes – including a killer doll and also some rather bad CSO.

The Mind of Evil (6 episodes, currently in black and white only [8])

The Master, in disguise as a Swiss Professor, creates a mind-control machine that he advertises as a method to end anti-social behaviour by removing negative impulse from criminals, but can also turn their worst fears against them and make them his slaves... Meanwhile, UNIT are providing security for a peace conference and disposing of a banned missile. You can see where this is going…

An all-action Bond-esque romp, which involved a live helicopter and a good deal of MOD assistance, this went seriously over budget (director Timothy Combe was never asked back to the series), I’d really like to see this again at some point.

The Claws of Axos (4 episodes)

A bunch of gold-skinned aliens arrive and offer Earth wonderful technology in exchange for fuel. Yep, it’s a trap and the Master is behind it…

Notable for the debut of a new, white painted TARDIS console[9] and the first interior shot since Season 6, this story has some silly looking aliens that mar a clever script and also a scene that many people think is bad CSO but actually was location filming with a blue sky. It’s a toss-up between this and the next story for weakest of the five…

The Doctor shows Jo the inside of the TARDIS, which promptly takes them to another planet. There they are caught in a power struggle between miners and farmers, with a powerful weapon also in the mix…

This was the first proper TARDIS trip since “The War Games” – in fact the director (Michael Briant, who did a few other 1970s serials) forgot how the TARDIS is supposed to materialise and had it just plop in and out, My review of “Colony” can be found here and here– as you can see, I wasn’t too keen on it.

The Master, posing as a rural vicar, summons a cloven-hoofed demon in a church basement. (That’s the description from The TARDIS Index File Wiki and it sums it up perfectly)

A fan favourite of the Third Doctor’s era, although a significant minority have a dislike of it. It’s not perfect and the end falls apart under close inspection, but when it’s got the Brigadier’s most famous line[10].

Letts’ and Dicks’ approach worked. Season 8 got an average rating of 7.9 million viewers. With a whole group of new loveable (and hissable) characters added, the show was firmly safe and next season would see the Doctor make further journeys away from Earth. As well as the return of an old foe…

[1]Benton’s first name was never given on screen, but expanded universe sources have stated it is John. Benton started off as a Corporal and ended up a Warrant Officer Class 1 (equivalent to the Command Sergeant Major rank in the US Army), holding the position of UNIT’s Regimental Sergeant Major.

[2]She didn’t even get a proper leaving scene as John was heavily pregnant by the time it came to film the new season.

[3]British equivalent to US AP.

[5]The first on-screen version that is. It has been established that there have been at least seventeen versions of the guy.

[7]Which is the requirement to be a true Cockney.

[8]The Doctor Who Restoration Team, who clean up the archive copies for DVD release, thinks they can re-colourise episodes 2 to 6 from embedded colour data in the black and white copies, but the archive copy for Episode 1 lacks the required information. Until they find some for Episode 1 or decide they’ll have to do without it, a DVD release date won’t be set – so this is currently only available in VHS.

[9]The original one, seen in colour in “Inferno” being light green to appear white on a B&W camera.

[10] “Jenkins! Chap with wings there – five rounds rapid!” Five Rounds Rapid became the title of Courtney’s first autobiography, although he wasn’t happy with it and did a second, Still Getting Away With It (I have a copy signed by the late Mr Courtney).