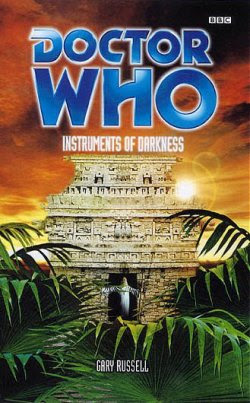 As I continue through the “Eleven Faces” series, I’ve had to expand from stories I haven’t seen (as I’ve seen pretty much all the complete classic ones) into the expanded universe, which I’ll call EU from here on in, of Doctor Who. This review is of one of the original tie-in novels, published during the “wilderness years”, when the show was not on TV.

There are four essential groups of 1989-2005 original novels (and the odd novelisation of something else) starring the Doctor, all paperbacks:

The BBC ended their classic novel series when the current run of the show began to focus on novels in that setting, but have recently restarted it with a Second Doctor novel and a new novelisation of the not-transmitted Season 17 story “Shada”.

These novels, aimed at an adult audience, expand the continuity in many ways (some of them controversial, such as Time Lord reproduction). There is no official statement on canonicity of any EU work and fans are allowed to pick what bits they want from them, in essence[2]. They have also added a large number of additional companions who have become popular among the fandom and appeared in other EU works, such as the Big Finish audios – most notably companion to the Seventh Doctor archaeologist Bernice “Benny” Summerfield, who not only got her own novel series, but also her own audio one.

I acquired the Gary Russell[3] 2001 novel Instruments of Darkness, the 48th PDA, in 2006 at a Doctor Who event in a London department store. Colin Baker (the Sixth Doctor) was there and I purchased a novel starring his Doctor for him to sign. Lovely gentleman, by the way.

I’ve finally gotten round to reading it…

Instruments of Darkness is a Sixth Doctor tale set nearer to the end of the incarnation. The Doctor and Melanie “Mel” Bush (a fitness fanatic with a propensity to scream a lot) have been travelling together for a while. Before the Mel met the Doctor for the first time[4], he travelled with two other companions, one of whom, Evelyn Smythe makes her sole PDA appearance here – she had previously featured in Big Finish.

This tale is a sequel to The Scales of Injustice and Business Unusual, the latter by Russell as well, featuring a number of the same characters.

The Doctor and Mel arrive on Earth just days before New Year. An old friend has been kidnapped and taken to France. And two murderous enemies are setting up a new life in the Peak District. Which of these threats should the Doctor deal with first? And why is his old travelling companion Evelyn Smythe using her knowledge of the future to make a fortune from chocolate cake recipes?!

This is a tale involving extrasensory perception (ESP) and mind stuff like that… I have a problem suspending my disbelief when it comes to things like that. Yes, I know this is a show with time travel and things bigger on the inside.

Competent, but not brilliant. There are better – and arguably worse – PDAs out there.

6/10
[1]The rights went to the BBC after the 1996 TV movie, but Virgin were allowed to publish the remaining ones in the series.
[2]Especially as one lot of EU can contradict another.
[3]Editor of Doctor Who Magazine from 1991-1995 and Big Finish producer until 2006, he is now a script editor on the main show, although that role is less prominent than it used to be. An actor as well as writer, he has done quite a lot of books.
[4]He met her for the first time in “Trial of a Time Lord”, but that was further ahead in her personal time stream.
Posted by Silent Hunter at 05:32

Email ThisBlogThis!Share to TwitterShare to FacebookShare to Pinterest
Labels: Doctor Who, Reviews