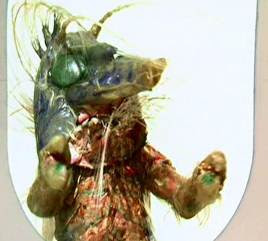 Graham Williams was going to have a rather rough three years as producer of Doctor Who. The British economy underwent ‘stagflation’ with inflation over 12% for the entirety of 1977 -  eventually the British government was forced to ask for a bailout from the International Monetary Fund. To give you an idea of the impact, something costing £1,000 in 1976 would cost closer to £1,700 in 1980[1]. Williams later stated that he was working on a real-term budget in 1979 of half what he had in 1977. In fact, inflation combined with orders from the BBC to rein in costs forced serious changes to the last two stories of this production block – the first having to undergo major production changes and the second being a rapid replacement for a story deemed too expensive. In fact, serious consideration was given to dropping the final story of the run altogether.

Other factors also impacted on the plans for the season. Firstly, the planned season opener by Terrance Dicks, then titled “The Vampire Mutation”, was deemed a possible send-up of a BBC adaptation of Bram Stoker’s Dracula and ordered to be shelved by Graeme McDonald, the BBC’s Head of Drama, forcing a new story to be written at short notice by Dicks. “The Vampire Mutation” survived as a script and was eventually made for Season 18 as “State of Decay”.

The second factor contained a planet-destroying space station and one of the most impressive opening shots in cinematic history.

Star Wars (as it was then called) was released in the UK on 27 December 1977. With its blockbuster budget, huge model shots and epic story, the entirety of television sci-fi was going to have to up its game to stay competitive. The Americans had the budgets to do it[2]; the British networks on the whole didn’t. However, after seeing a preview screening, Williams certainly tried to put a little Industrial Light and Magic (so to speak) into the show, with mixed success.

In fact this 26-episode run can itself be described as “mixed success”. Bob Holmes script edited the first four stories, then handed over to Anthony Read for the last two. With the horror element toned down, the humour stood out a lot more, but the stories themselves vary in quality massively. You’ve got three minor classics, but also three clunkers…

Tom Baker and Louise Jameson continued in their roles all through this season, although they would be joined by a new companion two stories in. One of the canis roboticus variety…

The Doctor and Leela arrive on the island of Fang Rock off the coast of England at the turn of the 20th century. Something evil is in the lighthouse and is killing off its inhabitants, including the survivors of a shipwreck one by one…

A moody minor classic with a high relative body count, “Fang Rock” was the last minute replacement written by Dicks – who was told to set it in a lighthouse by Holmes as payback for making him do “The Time Warrior” as a pseudo-historical. It also features the sole TV appearance of the Sontarans’ enemy, the Rutans and Leela’s eyes changing colour (with an in-story explanation)[3].

The story was the only one of the classic run filmed entirely outside of London, the (now closed) Pebble Mill studios in Birmingham providing studio space as engineering work rendered Television Centre unavailable. Also, a 1987 PBS broadcast of this story was the scene of a rather memorable (not to mention bizarre) broadcast hijack.

A rocket crew are infected by a sentient space virus. When the Doctor flies the TARDIS in to help them, he is infected himself…

Written by the “Bristol Boys” pair of Bob Baker and Dave Martin, this story, which features a Fantastic Voyage-style trip into the Doctor’s brain and a new TARDIS console room by Barry Newbery (the old version slightly altered), has acquired a reputation as a clunker – a “nice idea, shame about the execution” case It’s got bad CSO, a rather silly climax where the virus gets human size (see picture) and a noticeable goof where K9 clearly fires at a pre-cracked wall[4].

However, this story is notable for the debut of the robot dog K9, owned by a Professor in this story, but who is given to the Doctor at the end.

K9, K-9 or even K.9 (the precise rendering varies – we’ll go with the first), was created by Baker and Martin for this story[5], being ultimately kept on as the appeal for younger viewers was clear. There have been multiple on-screen versions of the dog, but they have all tended to be laser-armed, formal, highly intelligent and prone to pedantry.

The voice of K9 for most of his appearances has been John Leeson (1943-present), who has appeared in front of the camera and in the voice booth for a number of things, including being the first voice of Bungle in Rainbow[6] – he currently does continuity for Channel 4.

While Leeson’s performance posed no problems, the remote control prop caused a lot of them – being prone to interference, breaking down and getting stuck; there are three location heavy stories in which he effectively doesn’t feature because they had enough problems to deal with already.

K9 was hugely popular with most people and has even gotten two spin-off series attempts: the pilot only K9 and Company in 1981 co-starring Lis Sladen and the more successful Australian K9 (One season in 2009-10, with second planned).

Image of the Fendahl (four parts)

The last real “Gothic Horror” story, this one’s an atmospheric classic of the 1970s with superb dialogue and a very interesting plot.

The Doctor, Leela and K9 arrive on Pluto in the far future. The planet has six suns, a breathable atmosphere and a human population that is being economically exploited by an alien company…

The product of Bob Holmes having an argument with the Inland Revenue over his taxes, this is a deeply satirical tale (with more than one reference to the British tax system, such as a corridor called P45[7]) and also a rather good one, that stands up well today.

A clip from the story can be seen here.

At the edge of the known universe, the time travellers land on a spaceship that is on a quest to recover the genetic data bank of their species.

A story with a lot of references to mythology, especially Greek mythology and particularly the quest for the Golden Fleece, budget problems and the influence of Star Wars meant that much of the budget went into two impressive sets, with the rest of the sets realised using CSO. This latter use, the most CSO to date in a BBC production, makes this an attempt to do virtual sets three decades before Sanctuary that ultimately doesn’t work… with bad dialogue, bad acting and even Tom Baker looking bored, “Underworld” can ultimately be described as “ambitious but rubbish” – and not in a good way. Really, it’s just boring and the story has an awful reputation – it came 197th in the Mighty 200 poll, the worst story of the Tom Baker era.

The Invasion of Time (six parts)

The Doctor, acting very strangely indeed, takes Team TARDIS to Gallifrey and claims the position of President of the High Council of the Time Lords (long story, but he basically got elected to the position in “The Deadly Assassin”)… It turns out he’s brought some invading aliens with him. Just what is going on?

Leela and the first K9 depart in this story, the former deciding to marry a man she’s just met… This story was a late replacement for the planned “Killers Of The Dark”, abandoned as it was deemed too expensive (it would have involved a forum the size of Wembley Stadium filled with cat people). Williams and Read wrote this tale in a hurry, putting it out under the name of David Agnew[8]. Making things even worse for them, industrial action at the BBC limited the studio time available and so they decided to use emergency funding for filming a whole batch of TARDIS interior scenes on Outside Broadcast videotape at an abandoned hospital.

Unfortunately, the weight of production problems combined with some poor performances put this one firmly into failure territory. Season 15 ends on a poor note.

9.0 million viewers on average, while less than the previous season, still represented a sizeable hit and Doctor Who remained a firm fixture on the BBC schedules.

Louise Jameson had chosen to move on, but Leeson was still on board, as the end of “Invasion of Time” featured the Doctor revealing a box marked K9 MARK II. Next season, as well as a robot dog, the Doctor would be joined by someone very much his intellectual equal.

It was Romana time.

[2]Although not to huge ratings success – the original Battlestar Galactica only ran one season and its sequel Galactica 1980 got cancelled mid-run.

[3]Louise Jameson’s natural eye colour is blue, but Hinchcliffe had decided to have her wear brown contact lenses as he felt the blue eyes looked wrong on her savage character. Jameson found the contacts very uncomfortable and as part of the agreement for her to do Season 15, it was arranged for them to go.

[4]Not Newbery’s fault – the wall looked fine to begin, but the director asked for retakes and they couldn’t repair the wall in time.

[5]They own the copyright to the dog and get credited for his use each time appears.

[6]Thames Television children’s show running from 1972 to 1992 – ending when Thames lost the London weekday ITV franchise, but seeing some further stuff afterwards. Much loved at the time, with memorable puppet characters (Zippy, Bungle and George). There’s a rather infamous ‘adult’ bit (featuring lot of double entendre) that while appearing on various clip shows was never intended for broadcast – it formed part of Thames’ 1972 Christmas tape, a part of the staff Christmas party and mostly containing various outtakes.

[7]A form used in the UK and also Ireland when an employee leaves their job – one part goes to what is now called HM Revenue and Customs, one is retained by the employee and the other bit is meant to be given to the next employer or the benefits agency. Hence “getting your P45” is a British term for losing your job.

[8]An in-house BBC pseudonym used at this time for situations when the original writer couldn’t do fundamental rewrites and so the production team had to do the job themselves – BBC rules prohibited the production staff from taking this credit without getting permission and this was a quicker method than going through that process.