Falling between two stools (Review: 'Doctor Who and the Pescatons', 1976) 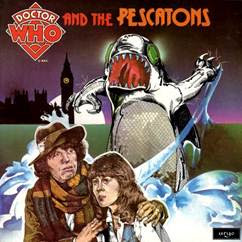 These days, we get original audios for Doctor Who at least a month. Back in the old days though, they were rather rare beasts. This one that I am reviewing as the first of the two Tom Baker works I am covering for my series, is only the second audio ever done for the show and broadcast – the second being a BBC Schools radio production called Exploration Earth from 1976, the same year as this was released.

As I’m between Seasons 13 and 14 for my history, it now seems appropriate to cover this one with a review as it was recorded during the gap – and released during Seas. Argo Records (an imprint of Decca), got a licence from the BBC to make an commercial Doctor Who story and release it on LP with the diamond logo on it. Argo never did another story in this verse and listening to this I can see why.

A mixture of first person narration from Tom Baker in-character[1] and dialogue with the Fourth Doctor and Sarah Jane Smith, this particular tale is a cross between a “Companion Chronicle” and a full cast drama. Well, it’s not full cast – there are only three voice actors in this.

I got this out via my local library – the 2005 CD release includes a second disc with an interview with Lis Sladen where she comments this story was very quickly put together – her contribution was to be handed a script and sent to a studio for a morning during a filming break.

This 2 c.25-minute-episode audio, written by Victor Pemberton (who did Season 5’s “Fury from the Deep”), sees the Doctor and Sarah Jane Smith on contemporary Earth, as they battle to stop an alien invasion by a fish-like race called the Pescatons, whose own planet is dying.

Unfortunately, there’s a lot of problems with the story. It’s too short for a start and the style this is done means that entire conversations we could have heard are merely relayed to us by Baker. While aliens rampaging around London is a bigger even than the TV show could manage, the first person narration doesn’t work here – you could have had this done by a full cast commenting about it from a bunker.

The script isn’t that brilliant – there are bits where I laughed when I shouldn’t have done and the whole thing needed another few drafts. There is one colossal issue that knocks all the others into consideration. As it is a big spoiler, I’ll put it in Russian. If you can’t translate it back, drop me an email and I’ll convert it for you.

The sound mix on Part One is pretty atrocious – the Doctor and Sarah’s voice conversation here sounds like they’re being interviewed, while I had to turn my CD player down for the rampage scene. Big Finish does this far better. The second episode is a lot better, but there’s an over-reliance on library sound effects throughout. Also, the incidental stings are very 1970s, a decade that taste forgot.

Sarah Jane gets very little to do here – she has only a few scenes and isn’t present at the climax at all. She also seems a bit naïve for an experienced time traveller and Sladen’s delivery of some of her lines speak to the lack of practice she’d had.

Tom Baker’s Fourth Doctor (who would not do another audio until 2009) does the best he can, but the script doesn’t help him much. While distracting a Pescaton by singing and dancing is very Doctor-ish, the Fourth Doctor is a man known for talking to himself and he doesn’t do that here.

The cast is rounded off by voiceover artiste Bill Mitchell[2] (1934-1997), playing Pescaton leader Zor, who sounds rather American (this threw me from a moment). He’s reasonable enough, but Zor’s character is your generic Hinchcliffe-era villain without any of the charm.

Pescatons ultimately fails as entertainment. There are some huge production problems that could have been solved if this wasn’t a rush job to make money from a very popular show.


[1]The only other incidence of a Who audio getting a first-person narration from the Doctor is 2010’s Dead Air, done by David Tennant.
[2]Actually Canadian, his husky-voiced, all-in-black including shades, career included an advert for Carlsberg, where he started it was probably the best lager… in the world. It says something that I am more familiar with the delivery of the last three words from Jeremy Clarkson. He also appeared on screen as a newsreader in Season 10’s “Frontier in Space”.
Posted by Silent Hunter at 11:27

Email ThisBlogThis!Share to TwitterShare to FacebookShare to Pinterest
Labels: Audio, Doctor Who, Reviews