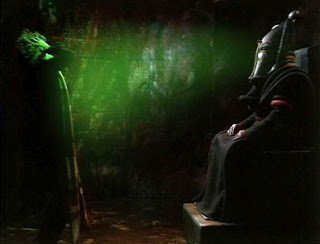 He’s just made him see “Timelash”.

I’ve mentioned Doctor Who Magazine’s “Mighty 200” poll before and I’ll be mentioning it again. In 2009, it asked readers to rate all 200 of the stories up to “Planet of the Dead” (the latest one broadcast at that point) out of 10. The winner was “The Caves of Androzani” from Season 21 – but the overall best season was this one, Season 13. Three of the season’s stories got into the top 25, with “Pyramids of Mars” (pictured) getting to number 7. There isn’t a single story that could be unambiguously deemed a failure here – although one comes close.

This season switched back to an autumn start for another 26 episodes, with Hinchcliffe and Holmes continuing to be in charge and continuing the “Gothic Horror” approach they’d started with the previous season, all of the serials here being inspired by classic horror or sci-fi works. The nature of the material was going to attract a bit of controversy.

Doctor Who today goes out at about 7pm; this was going out around six, which meant many more younger viewers. Certain scenes in this, including one particularly bloody gunshot scene, might be today deemed problematic at any point before the 9pm watershed[1] and certainly would be avoided by the current production team. Most of the audience loved it, but a small and vocal minority started complaining about the violence shown, with the tabloid press[2] happily running their complaints.

Tom Baker and Lis Sladen would be handling this on their own for most of the season, with no new male companion cast to replace Ian Marter’s Harry Sullivan. The Doctor would not have another male with him (not counting K9) until Adric in Season 18.

Terror of the Zygons (6 parts)

Summoned back to Earth by the Brigadier, the team aid UNIT in investigating attacks on North Sea oil rigs. They find that a race of shape shifting aliens and their giant cyborg are responsible.

Held over from Season 12, this Douglas Camfield-directed story marks the last regular appearance of the Brigadier, who would not appear again until 1983. It’s an atmospheric story with memorable aliens – plus a rather dodgy alien “Nessie”. Harry Sullivan, never a hugely willing TARDIS passenger, leaves the crew here.

A distress signal summons the Doctor and Sarah Jane to the planet Morestra in the far future, where a geological expedition is under attack from an unseen killer.

Inspired by the 1956 classic sci-fi movie Forbidden Planet as well as The Strange Case Of Dr Jekyll And Mr Hyde, this story was Lis Sladen’s favourite and terrified the young audience. The jungle set, entirely done in studio at Ealing, is superb and was for several years used to demonstrate how to do it.

In a mansion in 1911, mysterious things are going on. Killer mummies, a mysterious Egyptian and a powerful trapped alien with the power to destroy Earth. Sutekh must be stopped before he gives his gift of death to all humanity.

Influenced by The Mummy (the original two films, of course), Robert Holmes conducted a massive re-write of Lewis Griefer’s scripts, resulting in Griefer asking for his name to be removed from the credits and the story going out under the pseudonym of Stephen Harris[3]. The result was a true classic of Doctor Who, with a high body count, wonderful dialogue and some chilling scenes, such as the trip to an alternative 1980 or Sutekh’s killing of his chief henchman (“Sutekh brings the gift of death to all humanity”). Interestingly, the mansion location used was owned by Mick Jagger at the time and had previously been owned by Lord Carnarvon, who organised the dig that found the tomb of Tutankhamen.

This story features one of DW’s most prolific guest stars,  Michael Sheard (1938-2005), here playing Laurence Scarman. Sheard appeared in six stories in differing roles, appearing with five of the first seven Doctors. Outside of the show, he was best known for his role as Mr Bronson in BBC children’s’ drama Grange Hill[4] and Admiral Ozzel in The Empire Strikes Back, where he got killed by Darth Vader for bungling the Hoth attack.  He also played Adolf Hitler and Heinrich Himmler on several occasions for each figure – including a cameo as Hitler in Indiana Jones and the Last Crusade (which also features two-time DW guest star Julian Glover).

Arriving on Earth, the time travellers encounter a mysterious village where the telephones don’t work and the calendar never changes, with mysterious figures wandering around. For things are not as they seem and a group of aliens are planning to attack.

Season 13’s only near failure – there are some wonderful scenes here, but also some pretty big plot holes and a rather stupid TARDIS feature we never see again. Reviews of this Terry Nation story (his penultimate one for the show), which features UNIT, but only with Benton and Harry Sullivan from the “family”, have been mixed – the BBC put it with “Invasion of the Dinosaurs” for DVD release, which says a lot.

The Brain of Morbius (4 parts)

A renegade Time Lord who only exists as a disembodied brain wants a new body, so gets a mad scientist to build one for him. All he needs now is a head – at which point the Doctor arrives.

Terrance Dicks wrote this one, but Robert Holmes conducted such a re-write that Dicks asked for his name to removed and replaced by a “bland pseudonym”, so Holmes made sure it went out under the name “Robin Bland”.

This Frankenstein-themed tale is another classic, albeit with some slightly gory scenes (such as the aforementioned bloody shooting that saw a number of the VHS releases heavily edited and more criticism of the show. There’s a controversial “mind-bending” contest between the Doctor and Morbius that appeared to suggest that the Doctor had previous incarnations before Hartnell (which everything else contradicts) and poor Sarah Jane doesn’t have a nice time of it, spending an episode and a half unable to see.

The Seeds of Doom (6 parts)

The Doctor is called in to investigate two mysterious seed pods found in Antarctica. He determines that they are extra-terrestrial and very dangerous. Unfortunately, a plant collector wants the pods for his own collection and the pods are waking up…

A short notice replacement for the not-yet-ready “The Hand of Fear”, this particular story is an action one that features the final appearance of UNIT until 1989, but with none of the regulars. Douglas Camfield does a fine job with the story that features among its guest stars John Challis, who would play used-car salesman Boycie in classic British sitcom Only Fools and Horses[5]. This story also saw the final appearance of the original Peter Brachacki-designed TARDIS prop (contrary to popular legend, not re-used from Dixon of Dock Green[6]) – it had worn out after thirteen years and collapsed on Lis Sladen during production.

The Studios of Doctor Who

This story features a scene filmed at one of the entrances to BBC Television Centre and thus provides an appropriate opportunity to discuss the various TV homes of Doctor Who during its long run.

For the classic era, the show did not have dedicated studio space, having to compete with other BBC productions for it, with its own effects on the show’s production i.e. having to assemble and dis-assemble the TARDIS interior every time they needed it, resulting in entire seasons without a TARDIS scene as the limited budget had to go elsewhere. The following studios have played host to major bits of Doctor Who at some point:

·         Lime Grove, Shepherd’s Bush, London W12 (now demolished) – the original home of the show, which the production crew hated for being cramped, with Newman actually threatening to stop production if he didn’t get better facilities.

·         Riverside, Hammersmith, London W6 (still functioning as TV studios) – home of the show for much of the black-and-white era. The show only appears to have used Riverside 1, the largest of the studios.

·         Ealing Studios, Ealing (still functioning) – a famed location for film and television work, such as the “Ealing comedies”, this was mainly used for model and special effects work or the odd filmed insert due to a ban on the use of video cameras [See the Season 7 entry on film vs. video – Ed.]

·         BBC Television Centre, Shepherd’s Bush, London W12 (due to close in the next couple of years) – an iconic set of studios, TV Centre is for many associated indelibly with the BBC and is partly a listed building. For most of the show’s run, the interior action was filmed here – it even featured in a Doctor Who Magazine comic strip.

·         Upper Boat, Pontypridd (no longer used for TV) – used from 2006 to 2012, this facility was the dedicated Doctor Who/Torchwood/The Sarah Jane Adventures studio and was the largest studio complex in Wales.

·         Roath Lock, Cardiff – Current home of the show, where Season 33/7 is being filmed. Includes a bridge named after Russell T Davies.

After an initially not brilliant rating for the first story, Season 13 did superbly in the ratings, averaging 10.15 million viewers overall and never dropping below 8 million after “Zygons”. The show continued to be hugely popular in the public eye, with Baker (in costume), Sladen and Marter switching on the Blackpool illuminations in autumn 1975 – David Tennant is the only other Doctor to have done so.

Season 14 would see the show’s long run of success continue, but there would be further changes in front of the camera, as well as behind. For Mary Whitehouse wasn’t going away.

[1]The British version of “Safe Harbour”, it currently prohibits 15-rated material from being shown before 9pm and 18-rated before 10pm. It is regulated by British media watchdog Ofcom as one of their many duties – breaches of the Broadcasting Code can attract fines or even station closures (such as Iran’s Press TV) and are detailed in a fortnightly report. The Broadcasting Code section covering the watershed can be found here.

[2]Who like to take pot shots at one of their biggest rivals, especially in news, on a regular basis.

[3]The BBC at this time disapproved of script editors and producers writing for their own show – Hinchcliffe later secured special permission for Holmes to do two episodes for Season 14.

[4]Running for a total of 30 years from 1978 to 2008, the show became well-known for tackling serious controversial issues such as drug abuse, knife crime and rape where other shows might steer clear.

[5]A John Sullivan-created tale of two South London market traders Derek “Del Boy” Trotter and his brother Rodney, who attempted by various means to get rich, mostly involving dodgy stolen goods, such as sex dolls that turn out to be filled with explosive gas or locked suitcases with the combination inside the case. It ran for seven seasons, had seven more Christmas specials, inspired a spin-off series starring Challis and a prequel series, saw many of its catchphrases become very well-known and is still re-run on cable nets, as well as on BBC1, on a very frequent basis. Any further stuff for this is sadly unlikely following the death of John Sullivan in 2011.

[6]Running from 1955 to 1976, this was a “cosy” cop show set in East London and starring Jack Warner as PC George Dixon (a character who had previously appeared in a 1950 film called The Blue Lamp – where he was killed!), whose catchphrase was “Evening all”. While very popular, Warner’s increasing age and falling ratings led to the show’s end. Most of the 432 episodes are lost, but Dixon’s uniform is on display at the small Metropolitan Police Museum in Fulham, London. Also, a clip from the show features in the final episode of Ashes to Ashes.